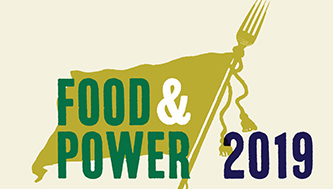 Report on the Oxford Food Symposium 2019: by Laura Shapiro

It was Friday afternoon, we were piling into the lecture theater for the traditional 4:00 pm welcome and plenary session, and as I looked around at the excited faces I remembered all over again why for me the Symposium is the most exhilarating weekend of the year. It’s the people, it’s that amazing array of people — 250 this time, from 27 countries, and everyone in the room certifiably food-crazed, bringing something unique to share by way of knowledge or ideas or dreams.

This year’s theme was “Food and Power,” a topic that inspired an immensely varied range of papers and lots of lively, sometimes contentious debate. Since the papers themselves will be made available, I’ll concentrate here on the plenary talks — four of them, all focused in one way or another on the way the food industry has amassed power of a practically immeasurable size and scope. But before I get into that, I have to say a word about Aglaia Kremezi’s brief presentation on Friday afternoon at the end of the session, just before we broke and made our way to drinks and dinner. It was a spoken memoir: she called it “Power Lunch of a Different Kind” and evoked what she said was the worst part of every day during her childhood — the family midday meal. “My father was lord and master,” she said, and the females in the family were expected to be submissive. Everything had to be ready at 2:00 pm exactly as he liked it or his anger erupted. Contradict him, and you got a slap. These lunches were miserable times, Aglaia said; and she grew up determined to have a life exactly the opposite of the one he wanted for her.

What I appreciated most about this first-hand account of power in action, besides its plainspoken honesty, was that it exploded so many of the truisms we cherish when we think about food. Family dinner, for instance — how many times have we all rhapsodized about that sacred meal and reflected happily on how food brings people together? I’m also struck by the fact that Aglaia’s work has always drawn on the wonderful food she grew up with, sitting at that soul-deadening table. It’s as if she distilled the flavors and left the oppression behind.

Okay, back to the plenary sessions. On Friday we heard from the widely-published journalist Joanna Blythman, who’s been called “the conscience of Britain in regard to food.” Her talk, which was the 10th annual Jane Grigson Trust lecture, used the late Jane Grigson herself as a touchstone. Jane, a food writer with a rare gift for the thoughtful, the practical, and the pleasurable, loved the vibrant flavors of the fruits and vegetables right at hand; but as Joanna pointed out, “The food world we inhabit now couldn’t be more different from Jane’s.” She discussed one example after another in the ongoing crisis that is our food supply, but urged us to resist what she called “evangelical solutions” that are supposed to solve all problems with a single swipe — fake meat, for instance. “We have to be skeptical,” she emphasized. To the irritation of some in the audience, she firmly refused to accept veganism as the gold standard for human nutrition. “We’re omnivores!”

Saturday’s keynote speaker was Marion Nestle, winner of more “best of” and “most influential” awards than I can possibly list here, and the author of groundbreaking books linking politics, science, and food, including her most recent, Unsavory Food: How the Food Industry Skews the Science of What We Eat. “Who controls the food system?” she asked, and showed via power point how just a handful of companies own pretty much everything in the supermarket. Our fond belief that we’re making meaningful choices when we pick this brand over that is one of the food industry’s most effective weapons. It’s true that there’s now plenty of criticism of the way the industry carpet-bombs our physical and cultural environment with ultra-processed food, but as Marion pointed out, the companies are fighting back exactly the way the tobacco industry did. Remarkably, though, she remains optimistic, especially when she looks at the proliferation of farmers markets, the countless organizations at work against Big Ag and Big Food, the success of initiatives like soda taxes in some areas, and the push to improve school lunch. There is deep-rooted change underway, she believes, and much more to come.

Then came Sunday’s two sessions, and these were wonderfully visionary, one lighting up the past and the other a possible future. In the morning we heard from Carolyn Steel, the author of Hungry City: How Food Shapes Our Lives, who looked back at the centuries during which feeding people was basically a matter of geography. Cities relied on nearby farms, farmers relied on nearby cities, and the relationship held fast until the middle of the 19th century, when railroads changed everything. “The money in food has never been in producing it,” she pointed out. “It’s in moving it around.” Transportation and all the other new systems that emerged from the industrial revolution brought about fundamental changes in how, when, and in what form the food reached the plate. So-called economies of scale have been ruinous, yet they’re unstoppable; as Carolyn said, “We’ve created this monster called cheap food.”

And if anyone can be said to have slain that monster, at least in miniature, it’s Zita Cobb, the final speaker on Sunday afternoon. Her story, she said, is about what is possible. Zita grew up on Fogo Island off the coast of Newfoundland, where the community came close to disintegrating after the near-extinction of the cod fishery that had supported the island for some 400 years. Fifteen years ago she returned to the island with a fortune earned in fiber-optics and set up Shorefast, a charitable foundation that supports the culture and economy of the island by engaging the entire community in the project of sustenance and development. There’s a luxury inn and a number of small businesses; their profits are reinvested in the community. Despite a limited growing season, 80 percent of the food at the Inn comes from the island — “We used to serve orange juice, but somebody once asked, what does orange juice have to do with us? And we do have all these berries…” Thanks to careful management, even the cod are starting to come back. Zita packed an astonishing number of compelling ideas into every minute of this talk.

Now, in brief, the glorious meals — and here we raise a glass to Ursula Heinzelmann and Gamze Ineceli, culinary masterminds behind the planning and logistics of the food and wine all weekend. You’ll find Sandra Mian’s account of what went into the creation of Friday’s splendid Puebla dinner on the Symposium blog, though describing it to us beforehand she added an important note — “Elisabeth Luard wanted grasshoppers.” And there they were atop the guacamole, where they made a big hit. Saturday’s lunch, a remarkable tribute to culinary activism at women’s hands, was offered by Munira Mahmud, Fatima Odonkor, Halima Al-Huthaifi and Lillian Olwa, with Leila Hedjem — all associated with the Hubb Community Kitchen in London, which emerged in the aftermath of the Grenfell fire and has become a local mainstay and ongoing inspiration. On Saturday evening we sat down to snails, split peas, braised lamb, and more, a stunning Greek dinner planned by Aglaia Kremezi and carried out by Michael Costa from Zaytinya in Washington, DC. And on Sunday, some of the women producers and artisans at London’s Borough Market offered up an abundant lunch of their breads, cheeses, preserves, and other simple pleasures.

After dinner, talking and socializing were the main activities, but there were a few organized attractions as well. Sandra Mian was responsible for a very striking display in the Bar Annexe — an Altar de Muertos, or Altar of the Dead, a living icon of food and flowers honoring the memories of three longtime Symposiasts: Harlan Walker, Sophie Coe, and Alan Davidson. And there was a standing-room only crowd in the JCR theater (which for once was not freezing, thanks to Joe Wheaton’s brilliant intervention with the air conditioning) for a production of “Food Night,” starring Elisabeth Luard, thoroughly disguised in a platinum wig. Her interview with “the Brexit Minister for Food Security” (Len Fisher, also well disguised in a suit and tie) was no more ludicrous than what we hear every day from the world’s most powerful leaders.