The 2010 Symposium started with welcome drinks in the college garden followed by the presentation by Raymond Blanc of the winners of the Young Chef’s Grant, all of whom were already hard at work on the preparations for a stupendous Feast of Cockaigne under the supervision of Tim Kelsey, Head Chef of the College kitchen, and guest-chef Jeremy Lee of The Blueprint Cafe in London’s docklands.

View a PDF programme of events and list of plenary and parallel sessions.

The Symposium began in earnest, as always, first thing Saturday morning with a plenary session featuring distinguished anthropologist Sidney Minz. His paper, ‘The Absent Third: the Place of Fermentation in a Thinkable Food System’, set the scene for discussion of a subject which, while not immediately obvious when reading the label on the frozen ready-meal, is still deeply embedded in every culinary tradition. After the coffee-break, symposiasts crowded back into the Lecture Theatre to hear Harold McGee present ‘A Chemical Introduction to Cured, Fermented and Smoked Foods’. After coffees, the choice of papers in the Symposium’s three venues included the traditions of Scandinavian preserved fish, Afro-American foodways, and courtesy of presenter Renee Valeri, an open-air tasting of surstromming, Sweden’s famous fermented herrings, a preparation so explosively pungent that travellers are forbidden to carry a tin of it onto a plane. Other subjects discussed in the morning sessions included preserved sausages in the classical world, Roman fish sauces, fermented fish seasonings in Japan and the Mediterranean, fermented taro in Africa and elsewhere, Korean kim-chee, and food preservation in Central Asia and Siberia. 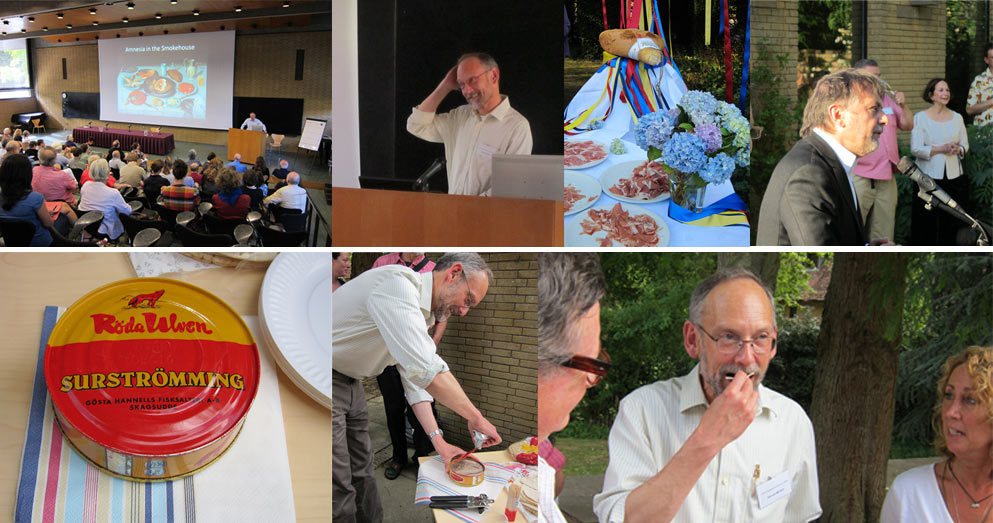 Lunch was a exquisitely fiery Sichuanese feast delivered by Soho’s Barshu organised by Symposium Trustee Fuchsia Dunlop, just back from researching foodways in central China. Parellel sessions then continued through the afternoon with papers on unidentified fermented foods gathering dust in the Museum of Ethnology in the Netherlands, preserved food in art, Transylvannia charcoal bread, Jewish pickles and their travels from Eastern Europe to the wilds of Canada, dried and fermented foods and the role of women in the culture of the Inuit nation, the smoke-cured and fermented milk of Kenya’s Samburu, and an anthropological study of the use of fermented root-starch, enset, in Ethiopia. After coffee and tea, symposiasts returned for a study of tempeh in Japan followed by stinking bean-curd and rotten vegetable-stalks as a delicacy in Shaoxing; parallel sessions tackled bacterial fermentation as an unacknowledged taste-enhancer in historical recipes, fermentation as a useful tool in contemporary food-preparation, and sourdough fermentation from the viewpoint of the microbe. Elsewhere symposiasts were treated to the smokey story of American shad-planking, Italy’s oil-preserved sausages transferred to upstate New York, and the creation of a smoked-meat tradition in Montreal. Saturday evening featured Tourism Ireland’s specially-filmed farm interviews of the producers who contributed their expertise (and impeccable materials) to the grand Irish banquet presented by chef Paidric Og Gallagher of Gallaher’s Boxty House with the assistance of Mairtin Mac Con Iomaire, Pauline Donaher, and Grace O’Sullivan.Next morning, Symposiasts assembled to listen to Ivan Day’s Sunday scene-setter, ‘Amnesia in the Smokehouse’. Everyone then made their way to a variety of parallel sessions: the choice included corned beef in Ireland, an archeologist’s view of salt-cured meat in soldiers’ diet, maramalade as medecine as well as preserves, the role of yoghourt in the Turkish kitchen, fermented foods in Nagaland, and what and why is ‘Boza, Innocuous and Less So’; others unravelled the secrets of ancient Jewish sausages, classical and modern olive-preservation in Greece, and the folklore and preparation of Cyprus’ cured ham, hiromeri. 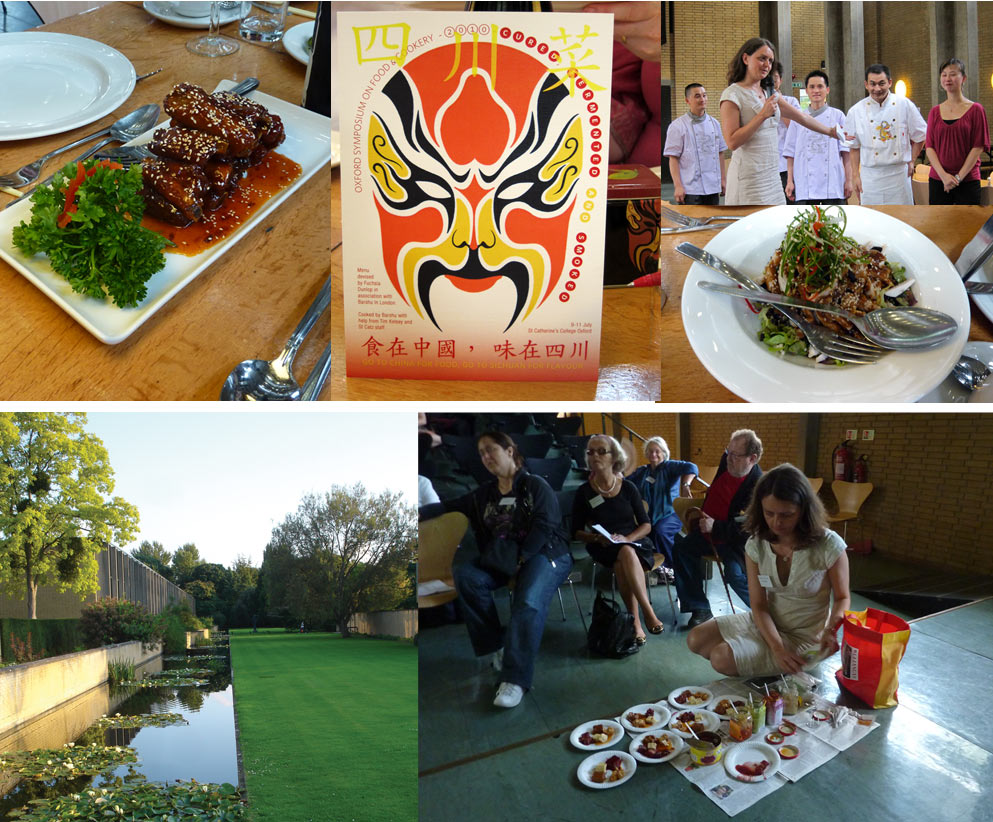 After a quick coffee break, fun and games continued with Charles Perry’s playlet, Wurstenders, with costumes and interjections by the multi-talented Alicia Rios, followed by raffle-prizes and grand auction. But the day’s honours undoubtedly go to Ove Fossa and Sven Fossa who, with the assistance of Terje Inderhaug and Pål Drønen, gathered together a consortium of Norwegian small-producers who delivered (via sailboat from Norway to Cardiff) a dramatic array of traditional Norwegian ingredients preserved, as the subject of the Symposium dictated, by salting, fermenting, and smoking. The menu included very little that was familiar and much that was both unkown and delicious: mutton ham, smoked reindeer-tongue, and several preparations based on wind-dried stockfish, along with unusual crispbreads and cheeses, the whole rounded off with soured cream and cloudberries, a raspberry-like berry native to the Arctic tundra with a flavour of smoky pine-needles. Thereafter symposiasts returned to the Lecture Theatre for a panel chaired by Harry West on ‘Fermentation as a Co-evolutionary Force’, ‘Artisanship and Control as applied to Farmhouse Cheddar’, and ‘the Science and Savour of Dry-fermented Sausages’. The Symposium concluded an expression of deep gratitude from the whole Board of Trustees to our departing Chair, Carolin Young. 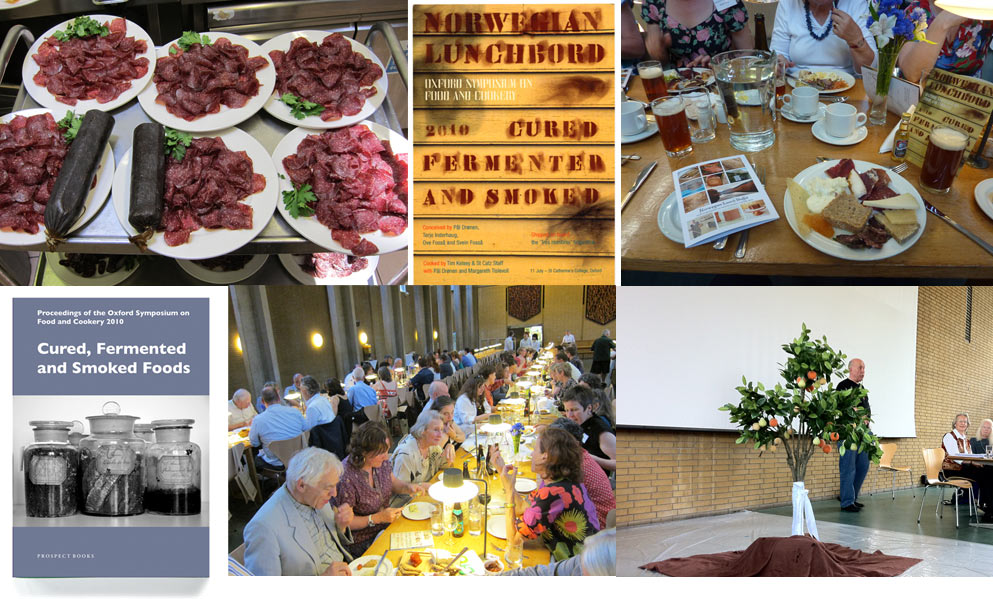