Is the kitchen the new venue of foreign policy?
The Conflict Cuisine Project. 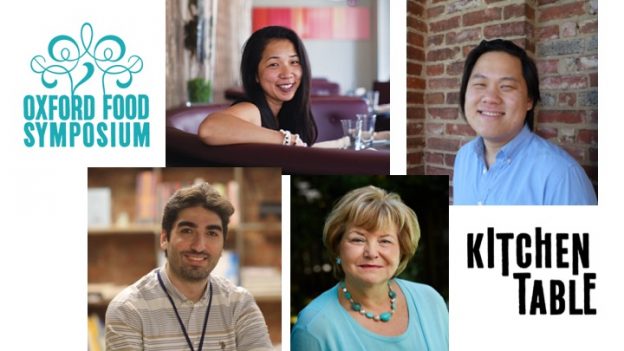 At our seventh Kitchen Table, we'll be discussing the effect of diaspora cuisine on host-countries with Johanna Mendelson Forman, leader of the Food Security Program at the non-profit, Washington-based Stimson Center, and some of her collaborators. The link between food and war, even in the 21st century, is evident from the rise of Syrian and Afghan restaurants and festivals celebrating refugee-cuisine across Europe. The importance of food and cooking cannot be underestimated as a way of empowering and integrating refugee communities not only through food-outlets as sources of employment, but also in diaspora-inspired cookbooks and articles.

The exchange is by no means one-way: the addition of new flavors and experiences is, for both host and hosted, a valuable way of promoting understanding and social integration. The need for understanding is emphasised through Dr. Forman's own educational project, Conflict Cuisine®, established in 2015 as way of understanding the roots of conflict through food. The project has recently grown to embrace gastro-diplomacy as a politically-acceptable but sometimes controversial way of reaching hearts and minds through public display of what's set on the table. Joining us at table will be Elaine Chon-Baker, Alaa Alarori, and Noobtsaa Philip Vang.

Johanna Mendelson Forman is an Adjunct Professor at American University’s School of International Service and a Distinguished Fellow at the Stimson Center where she leads the Food Security Program. Through her wide-ranging career in international affairs, she has built a reputation for addressing longstanding issues with new perspectives and innovative ideas. Her frontline experience as a policy maker on conflict and stabilization efforts drove her interest in connecting the role of food in conflict, resulting in the creation of Conflict Cuisine®: An Introduction to War and Peace Around the Dinner Table, an interdisciplinary course she teaches at the School of International Service at American University in Washington, DC.  In establishing this link between food and conflict, Johanna developed a new interdisciplinary platform examining why food is central to survival and resilience in conflict zones.

Today her research focuses on the study of gastrodiplomacy and the emergence of social gastronomy, the use of food as a means of social impact and investment to communities at risk.  She is one of the leading voices in the global Social Gastronomy Network, a movement that is helping a new generation of chefs and food activists address a wide range of issues including climate change, food waste, and ending global hunger.

In 2017 she helped launch the Livelihoods In Food Entrepreneurship Project (LIFE), a consortium of organizations under the Center for Private and International Enterprise. This program, supported by the State Department, has supported Syrian refugees and Turks who are using food entrepreneurship as a tool for social integration. She recently co-edited a cookbook The Cuisines of Life: Recipes and Stories of the New Food Entrepreneurs in Turkey, published in December 2019.  It features recipes by refugee food entrepreneurs and essays about the way food creates community.

Elaine Chon-Baker is Founder and Managing Director of Mokja Ventures, a Washington DC-based boutique venture fund that invests in restaurants and hospitality tech. Elaine works with immigrant entrepreneurs in launching and growing their businesses. She is currently consulting to the James Beard Foundation on their Women's Leadership Programs to support the lifecycle of women in food and beverage.

Alaa Aloriri is a Syrian humanitarian management professional, who started his career in Syria as a software engineer. Settling in Turkey, he first worked with organizations responding to the emergency inside Syria, then shifted his focus into supporting Syrian entrepreneurs establishing their food businesses in Turkey. Alaa is currently the Programs Manager at Karam Foundation working with Syrian youth to support them becoming the future leaders of a better Syria.

Noobtsaa Philip Vang is Hmong American born to refugee parents from Laos. He grew up eating his mom’s delicious Hmong food and craved it when he came to D.C to study. For so many in the Hmong community, including his parents, impossible language and educational barriers prevent them from finding living wage jobs. Recognizing that many immigrant and refugee communities face the same challenge, in 2016 Noobtsaa founded Foodhini, a food venture focused on creating sustainable job opportunities for immigrant and refugee communities by using the power of food. Foodhini is an online restaurant system that provides immigrant and refugee chefs the opportunity to prepare and sell their unique home recipes directly to customers through delivery and catering.

It’s complicated. Claiming hummus as the national dish can stir up all sorts of trouble.
Read
Here are four seminal essays on gastrodiplomacy (including one by our Speaker) in the 2014 (winter) issue of Public Diplomacy, free online at:
Read
If Burger King and Macdonald’s can agree to settle their differences, is this a blueprint for world peace?
Read
You’ll find a report on the Conflict Cuisine Project here:
Read
Essays and recipes to change hearts and minds include contributions from Filiz Hösükoğlu, Joan Nathan, Anissa Helou, Johanna Mendelson Forman:
The Life for Entrepreneurs Cookbook