Shared Visions: Expressions of Hope
through Food on the Table 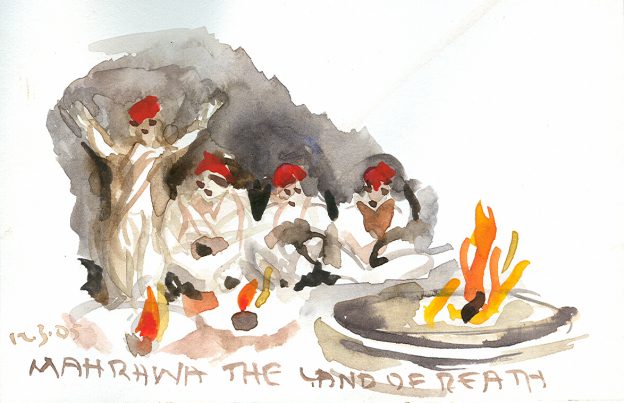 Generosity to others expressed through the sharing of food is the guiding light of our celebrations everywhere at all times of year, but particularly at time of darkness - real or emotional.  Universal symbols of hope include lighting a flame, encouraging seeds to sprout, bringing greenery indoors, setting a light in the window, leaving an empty chair for absent family or friend or a passing stranger who might be other than they seem.  Hope expressed directly through food on the table include roundness, sweetness and the light, warmth and flavour of the sun. With the festive season in mind, we'll be travelling with Elisabeth Luard - north, south, east and west with Nanna Rögnvaldardóttir in Iceland, head for Istanbul with Priscilla Mary Işın, travel to India with Priya Mani, and explore the multi-cultural port of Rotterdam with Linda Roodenburg.  To keep us all on track, Gamze Ineceli will be lighting the candles to welcome all comers.

Food historian Priscilla Mary Işın lives in Istanbul and has been writing for many years on the cultural and practical significance of Ottoman and Turkish culinary habits in the traditions of the eastern Mediterranean.  Books that confirm the cultural importance of sweetness include Sherbet and Spice (2013), while in her most recent, Bountiful Empire: A History of Ottoman Cuisine, Mary explains the importance of sweet things as an expression of joy:
"Special occasions of all kinds, religious and secular, were commemorated with food. These included religious events and festivals such as Ramazan, Muharrem, the return of pilgrims from Mecca and the anniversary of the birth of Muhammad; the ancient New Year festival of Nevrûz, the promotion of journeymen to master’s rank at guild ceremonies and political events such as military victories; and of course, the milestones of life: birth, circumcision, marriage and death, even the appearance of a child’s first tooth and first day at school.  None of these were complete without food of some kind, particularly sweets, which symbolized happiness and goodwill, and carried sacred connotations, as epitomized by two apocryphal sayings ascribed to the Prophet Muhammad: ‘The love of sweets springs from faith’ and ‘ True believers are sweet’ ."

Elisabeth Luard is an author and illustrator whose work includes some twenty cookbooks - among them European Peasant Cookery and Sacred Food - a couple of door-stopper novels and four memoirs with recipes including Family Life: Birth, Death and the Whole Damn Thing of which the most recent is Squirrel Pie. As a natural history artist in an earlier career, she uses sketchbook and watercolours to record her travels, and often illustrates her own work. She received the Guild of Food Writers' Lifetime Achievement Award in 2017. Here's what she says about expressions of hope:
"I was first struck by the universality of the vocabulary of hope - how we celebrate or commemorate or invoke intercession by a Higher Power - when I learned from my neighbours in Provence the proper way to set the table for the Fasting Supper of Christmas Eve. Similarities with the ancient celebration of No-Rooz were obvious - which is perhaps no surprise when you consider that in the beginning, when our ancestors lit a fire at the cave-mouth for fear of the dark, there were so few of us.  Small wonder, then, that in time of trouble or uncertainty or joy, we feel the need to light candles, taste sweetness, sprout seeds - in short, to feel and taste and welcome back the light and warmth of the sun. It's atavistic, a return to the ancestral cavemouth, but we do it just the same."

Priya Mani is a hands-on family cook. She is a designer and cultural researcher based in Copenhagen working to create gastronomical experiences. She is particularly interested in the human factor and in the context of food she has researched extensively on many aspects of food - development of traditional diets, choices, consumption, diabetes and obesity. In her carrier over the past 20 years she has pursued the craft of culture, through textiles, technology and food. Her main field of interest is the social interactions of making, presenting and consuming food:
"The theme is just so appropriate for the times we are in.  No-rooz is very close to my heart since, in an earlier life, I studied Parsi Zoroastrianism for many years. And our own New Year Celebrations (Vishu kani) has a great many resemblances to the festivities of No-Rooz.  An arrangement of seasonal produce is presented on the morning of the New Year Day. Fresh fruits and vegetables that cover all the essential tastes (sweet, sour, bitter, astringent) and textures (grains, symbols of fertility, prosperity and abundance) are meticulously placed so as to be reflected in a mirror to provide more abundance). This is done by a family elder, and no one else gets to see it until New Year's Day.  Each member of the family is woken up gently and they are guided with their eyes still shut, so that finally, when they open their eyes, the arrangement is revealed.  This is followed by a big feast which, along with visiting relatives and friends, is a ritual typical amongst the Hindus of Kerala and Palghat Brahmins."

Nanna Rögnvaldardóttir is Iceland's favourite scholar-cook. Her definitive Icelandic Food and Cookery is in reprint with Forlagið from the original New York edition, and her contributions to OSFC's annual published Proceedings include an essay in 2011's Celebrations on Icelandic feastings.  Here's what she says about the traditions of midwinter in her homeland:
"I could tell you about Icelandic Christmas celebrations in the old days, when the winters were so dark and bleak and the flickering tallow Christmas candles were almost the only illumination, and even in the poorest homes people tried to serve everyone feast food that could be made to last for many days...even though Christmas tables are overflowing with delicacies from all around the world, many still stick to old traditions. And I could talk about laufabrauð, the traditional Icelandic Christmas bread, and explain that it is not just bread, it is a real community tradition, because you never make leaf bread on your own, it takes a big family or group of friends or club or a whole village (almost) and is a way of connecting and learning."

Linda Roodenburg will already be well-known to Symposiasts for her collaboration with Oxford's Pitt Rivers Museum on recipes appropriate to the museum's collection of food-related artefacts.  Linda's contribution to 2011's OSFC Proceedings is an account of the multi-cultural celebrations in the city-port of Rotterdam, including Diwali, Chinese New Year and the traditional festivals of Ethiopia, Surinam, Anatolia and Cape Verde. Here's an extract:
"Over the last 50 years the population of Rotterdam has changed dramatically.  Now almost 50% of the inhabitants are immigrants.   These newcomers brought their own food habits, adapted them to their new urban lives, and so changed the food culture of the city... Nowadays everybody eats pasta, rice, and potatoes, and the Turkish pizza is as common as the Dutch new haring or the Vietnamese spring roll...Recently traditional Dutch (Christian) celebrations have been changing into more neutral intercultural events...people are looking for common elements in their celebrations.  Thus specific religious aspects may be left out or reinterpreted as universal symbols.  In December, many Moroccans and Turks decorate their homes with Christmas trees and candles, symbolising the lengthening of the days and the coming New Year."

Celebrations: Proceedings of the 2011 Oxford Symposium on Food & Cookery.

For KT3, we especially recommend:

The Raw & The Cooked: Claude Levi-Strauss