Women and Diaspora.
Making-do and rebuilding, for food, with food 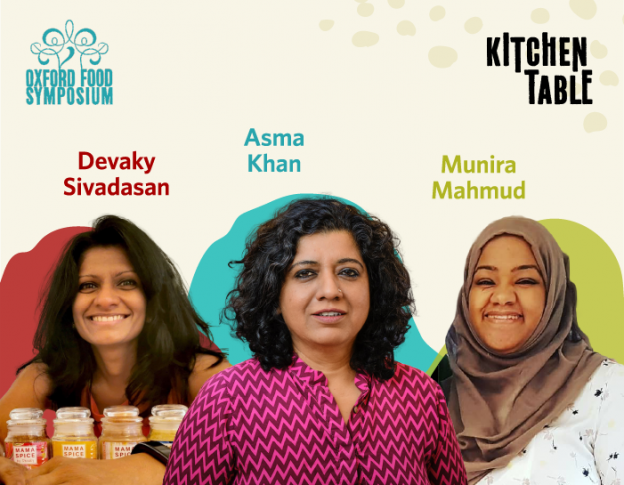 We will hear from three women who had to start again from zero, in a foreign place, amidst a foreign culture, a language unknown to them, unfamiliar smells and tastes. How to keep yourself together under hardship and feed your family, against all obstacles? Through food.

Asma Khan, Munira Mahmoud and Devaky Sivadasan will share their stories at the Kitchen Table.

Why do we need to know more about their experiences? Because we need to learn from each other, encourage and actively help each other in our daily making-do. Each of us might find themselves in a similar situation at some point. It might be natural disasters, religious persecution or other imminent threats to life and limb; but it could also be apparently minor disruptions - how do we adapt? Rebuild? Even carry on living?

Restaurateur Asma Khan’s path to being listed #1 in the 2019 Business Insider’s “100 Coolest People in Food and Drink” is unconventional. Born in Calcutta with a royal background, she studied at Cambridge and King’s College London, where she received a doctorate in British Constitutional Law in 2012. But rather than focus on a legal career, she started hosting private supper clubs in her home; eventually leading, in 2017, to her Soho restaurant, Darjeeling Express.

What distinguishes Darjeeling Express (in addition to its superlative Rajput and Bengali home cooking) is her kitchen brigade: comprised entirely of South Asian women, most are, like Khan herself, “second daughters,” culturally disfavored when compared to sons.  Khan’s work helps support the Second Daughters Fund, designed to send celebratory gifts to Indian families upon the birth of a second daughter and to help support their education.

Munira Mahmud arrived in the UK from her native Uganda in 2005. With the birth of her first child, she became acutely aware of the cultural differences new mothers encountered: in Uganda, communities traditionally rally to help the family, yet such support was lacking in her first London neighbourhood. When she moved to the Grenfell Tower complex, she found much of what she had yearned for, until the horrific 2017 fire destroyed the tower and claimed 72 lives.

Mahmud took action. Working with other survivors, they formed a community kitchen to share recipes, mourn, and heal, ultimately leading to the publication of Together: our community cookbook in 2018. The book’s proceeds funded the renovation of the community kitchen (known as Hubb, meaning love in Arabic), and it continues to be a center for those affected by the fire and others in need. Thinking of her own struggles as a new mother, she has also founded Kina Mama, an organization that provides nutritious food and other support to vulnerable new mothers, raising funds through its catering services.

Devaky Sivadasan left India at the age of 26, her 3 year-old son in tow, fleeing an abusive arranged marriage. Arriving in Marseilles in 2000 with plans to study economics, she encountered a Sophie’s Choice when a customs agent initially refused to issue a visa for her son: rather than abandon her son or her dreams of a better life, she educated the agent on the values of liberté, egalité et fraternité. He returned with visas for both.

After studies and a 12 year high-profile career at Airbus Helicopters, Sivadasan knew it was time to pay it forward and help others build to strong futures. She launched Mama Spice in 2016, a spice emporium where she melds the savours of her native India with her adopted Provence in her spice blends. Her model of entrepreneurship, accomplished through the Kedge Business Nursery Incubator, encourages others to draw upon their experiences to build better lives.

For general background, a scholarly but blissfully jargon-free study of the role of cooking and eating for diaspora populations:

Read
For expressions of emotion and friendly rivalry within diasporic communities, plus adaptations and appropriations:

For a case study of London’s contradictions of affluence, need, generosity and community, now receiving more attention due to Covid-19:

For changing hearts and minds through food: