We need to talk about...
Writing Recipes: the Art of Communicating How to Cook 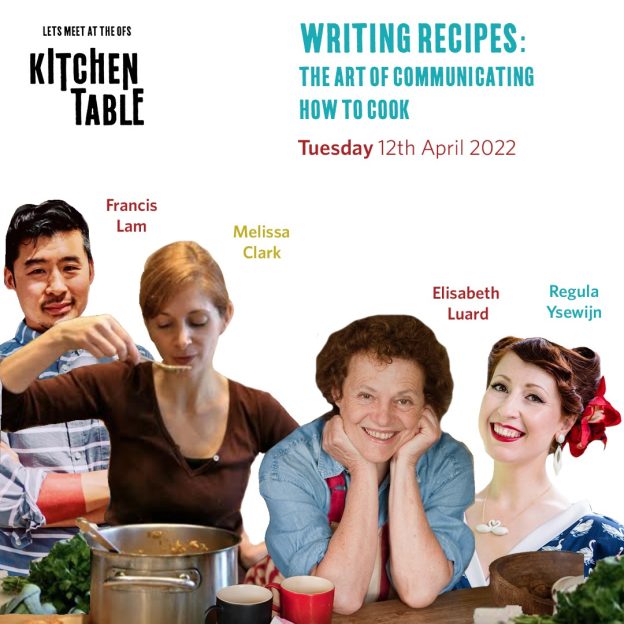 Join food writer, New York Times cookery-columnist Melissa Clark (dozens of cookbooks, loads of awards - 'nuff said) at our next Kitchen Table to discuss - what else? - Writing Recipes: The Art of Communicating How to Cook.

Melissa will be welcoming host of The Splendid Table and editor-in-chief at Clarkson Potter Publishers Francis Lam, food-writer, photographer and uber-stylist Regula Yswijn along with our very own OFS Chair, writer-illustrator Elisabeth Luard.

Questions to be addressed include what has changed (and why?) since M.F.K. Fisher laid down the ground-rules in 1969: "There are some things I demand to be told in a recipe. Basically they are two: the ingredients and the method."   Sound simple?  Not really.  Garage manual or traveller's tale - what works for where we are right now?

New York Times food columnist and cookbook author, Melissa Clark has written 45 cookbooks, including the best-selling Dinner In French,. She’s won two James Beard Foundation awards and two IACP awards (International Association of Culinary Professionals). In 2012 she joined the staff of the New York Times, where she writes the highly popular Food Section column, A Good Appetite and has starred in over 100 cooking videos. Born and raised in Brooklyn, she loves anchovies, radishes, chicken feet, and lox but not in that order.

Francis Lam, host of The Splendid Table and editor-in-chief at cookbook publisher Clarkson Potter is an award-winning journalist whose contributions and columns include The New York Times Magazine, Gourmet, Bon Appetít, Food & Wine, Lucky Peach, Saveur and the Financial Times.

Regula Ysewijn (aka Miss Foodwise) is a multi-talented Belgian culinary historian, author, stylist, photographer, tv presenter and podcaster who specialises in baking and pudding-traditions in Britain and the Low Countries. Recent books include Oats in the North, Wheat from the South and The Official Downtown Abbey Christmas Cookbook.

"During a forty-year career as a writer,  Elisabeth Luard, Chair of the Board of Trustees of the Oxford Food Symposium and recipient of the Guild of Food Writer's Lifetime Achievement Award has published some twenty cookbooks, a couple of door-stopper novels and four memoirs with recipes including Family Life and the latest, Squirrel Pie.  As a natural history artist in an earlier life, she illustrates her own work.

And here is an article about how Diana Henry manages to write hundreds of great recipes a year: