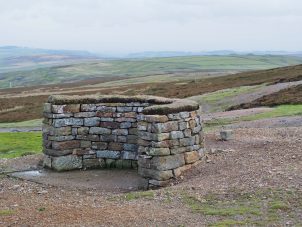 There is no wilderness in Britain. The landscape which today forms the battleground between conservationist and gentry is only the latest expression of the work of millennia, to subjugate wildness into something amenable to humanity. The land is manmade. Once a vast forest covered the country, almost to the peaks of the uplands; the Broads and the Fens were water; the Suffolk coast was heath and wood. The nature which inhabits these industrial landscapes is that which we allow to exist – everything dangerous is long-gone, and everything not useful has retreated. Hares, snails, pigeons, rabbits, deer, introduced by waves of invaders and migrants as sources of food or entertainment, have all become part of the British ecosystem. Nothing is natural, nothing is wild; a muntjac eats the brambles in my garden.

Any attempt to rebirth a truly wild British landscape would require, ironically, a huge intervention. A near-total annihilation of the human population, not to mention of our domestic animals, would be followed by the reintroduction of wolves, bears and wildcats. There are those who advocate for this, if not in such extreme terms – it is the logical conclusion of a certain strand of conservationism, but most people tread a more compromised path.

If a return to total wildness is impossible or undesirable, what then? If you agree that we have some responsibility towards the rest of nature, to try and ensure we do as little harm as we can – well, it seems arbitrary to choose now or rather a rose-tinted recent past as the moment to conserve, but what else to do? Even if we had the inclination to resurrect ecosystems past, we don’t have the ability or the knowledge. The culture in a pot of kimchi has still not been successfully modelled – imagine the complexity of the wild wood! So we tend to our garden, we manage and conserve, we farm the things we think are farmed, we hunt and forage the wild ones – and this, really, is the problem. Most of them are not wild.

The humane farming of animals for meat has taken huge strides in recent years. A loose coalition of chefs, farmers and consumers has made a huge change to animal welfare and to its importance in public discourse. Everyone knows to at least pay lip service to happy animals, and there is at least a general recognition that, quite apart from ethical issues, meat tastes better when it has spent its life outside, eaten a varied diet, had a gentle death. The quality of meat in Britain now is really quite astonishing, and cooks both professional and amateur are right to insist on the good stuff; it is more expensive, but so it should be. It takes space and time to farm well, and these things cost money.

On the other hand, we have game. Rabbit has ups and downs, but it is still, alongside pigeon, plentiful and generally healthy in its large feral populations, shot at by farmers as pest control; it is, I think, right to eat it for as long as these conditions attain. Although farmed in some places, the various types of deer which roam Britain are in a broadly similar situation – in the absence of wild predators, they are regularly culled.

Game birds (pigeon excepted) on the other hand, are very different. Most, like the rabbit, were introduced to be kept as a semi-wild food source, though lacking the rabbit’s capacity to breed, adaptability to various environments, and resilience to biological warfare, they need keeping, breeding and rearing as chicks, their environment heavily managed to the detriment of other species – all so they can be shot at. Are they wild or farmed? The huge pens called ‘grouse moors’ are kept solely for the benefit of these creatures. Foxes and stoats, which prey on them, are trapped and killed, as are hares, which can carry parasites harmful to grouse; the surface of the moor is burnt away. All of this is legal; the shooting, poisoning and persecution of raptors is not. Higher ground is drained, and towns flood.

This is farming, free-range farming on a wastefully gigantic scale – but without the payoff. Where cows are herded into abattoirs one-by-one, unaware of the imminent blow of the bolt-gun, calmly led to euthanasia, these birds are hounded, shot at, winged, dispatched, shoved into the bag. No wild meat should require such intervention; no farmed animal deserves such a death. Driven grouse shooting gives us the very worst of each world. The reason it is allowed to continue, of course, is that it is a hobby of the very rich, for whom landscape is not red in tooth and claw but just another playground under their command. When you cook with grouse you are cooking not wild nature but the carrion of an aristocrat’s game.

A film of Thom Eagle’s 2016 Symposium presentation on the problem of waste in a commercial kitchen can be found here (from 51:00). A previous version of this article appeared on Thom’s blog In Search of Lost Thyme. He can also be found on Twitter @thomeagle