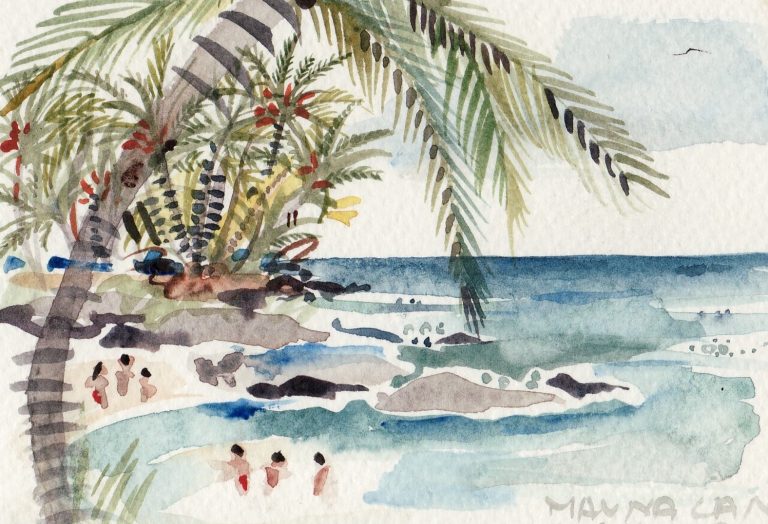 In our second literary musing relevant to this year’s theme, Portable Food: Food Away From The Table, our president Claudia Roden CBE describes a memorable outdoor feast

It is part of the introduction to her book Picnics, first published by Jill Norman Ltd, 1981.

“Visions of paradise have always been of the great outdoors, of trees laden with luscious fruit and rivers flowing with milk and honey, and many have been moved to eloquence by the first dining room of man.

“My own experience of the Garden of Eden was in the Seychelles islands. The smell of pork roasting on a fruit-wood fire and the Indian Ocean Creole mixture of garlic, spices and chillies frying in coconut oil still fill me with sudden bursts of happiness, summoning as they do the primeval forest, the tropical climate mitigated by the sea breeze and the waters so clear that ou could see the multicoloured fish and the shells and corals rocking gently on the white sands at the bottom.

“Every day at noon, after a morning swim, I scrabbled between clumps of fern and granite rocks up the hill slopes, lured by the smell of cooking which wafted round the lush vegetation.  Light clouds of smoke rose beside corrugated iron-roofed huts nestling behind rocks and between coconut palms.  They emanated from burning husks over which large heavy pots were sitting firmly on sturdy grills, the local outdoor kitchen arrangement.

“Whiffs from ripe mangoes and pawpaws, still hanging on trees, mingled with the smell of bananas simmering in coconut milk and the fermenting juice of sugar cane.  It was difficult to tell if the scent of vanilla came from the fragile pods dangling on their climbing stalks or from the sweet potato and yam pudding in the pot.

“Scents became confused with colours and sounds.  A hundred shades of green were pierced by scarlet flowered flamboyants and pale mauve bougainvillaeas.  The gentle bubbling of the daube and the crackling of the fire were accompanied by the rustling of palms and the chattering chorus of little red cardinals, warblers and sunbirds.

“Lunch was prepared in the open, for all to see. Exchanges were shouted about the contents of the pots which were fondly watched over by the women.  To constant giggling and laughter I accepted every invitation to taste.  I tried a peppery fish soup, the contents of which had been found caught in the twisted bamboo trap now resting by the fire. A coconut fallen not far away had provided the liquor for the breadfruit daube.  Black freshwater prawns, caught in the stream by a little boy, were turning red on dying embers.  A sweet potato melted in the ashes.  Indian Ocean Creole food, amid the trees and the birds, was an assault on all the senses; I had to hold my breath to eat.  Today the smell is still in my nostrils, the taste is still on my tongue.

“The pleasures of outdoor food are those that nature has to offer, as ephemeral as they are intense. A bird will sing his song and fly away, leaves will flutter and jostle the sunlight for a brief second, flowers and scents have each their small parts to play in the perfect happiness of those enchanted moments.”  (copyright Claudia Roden. Extracted with the author’s permission).