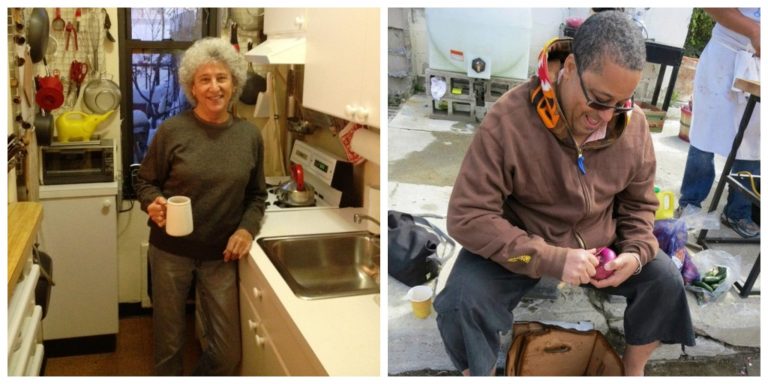 Kitchen Table No. 1 – digest from the chatline

When Marion Nestle and Scott Barton pulled up a chair at the OFS Kitchen Table to discuss Food, Power and the Powerless with some hundred fellow-guests, it was clear that the conversation would be tough and to the point.

Asking tough questions and looking for the right answers is what we hope to do at the OFS Kitchen Table – an informal, friendly, no-holds-barred monthly gathering where we debate a single subject with invited guests whose views we need to hear. Established by special request from this year’s v-Symposiasts, attendance is open to all – just book in and turn up.

What follows is a digest of the talking-points from the chatline.

From US: For Marion and Scott: what’s your opinion on providing a first class each day in every primary school, based on edible pedagogy with active participation? All subjects can incorporate food into their respective curriculums to ensure that each child gets a meal at the start of each school day.

From UK: A good part of my work is working with children as well as adults, and the one of key influences is getting kids involved in fruit and veg early on. It’s the pleasure to explore which impacts highly on later life-choices thru the idea of getting all children involved in school do like in Japan and Indian, where children respect food and develop a healthy attitude towards food and valuing its impact on health and the environment.

From Demark: In Copenhagen, some Farmers organise themselves by offering bags with fresh greens/produce to the public on a weekly basis – some restaurants turn their restaurants into groceries – my fishmonger who normally only sell to restaurants have started a new idea after closing of top restaurants: a box of mixed fresh fish to the people – lots of initiative since the pandemic.

From Ireland: In Ireland, we now have a number of schools with edible gardens. Local communities, parents, garden centres, chefs and producers are helping teachers and children to manage them. Children and parents are now asking schools to put one in. Change is happening on the ground, but there’s a lack of support at government level!

From UK: Immigration, if it’s done anything in UK, is to improve things – both in terms of restaurants and shops. East Europeans generally would eat better snacks than UK indigenous and so it goes. Brazilians in UK that I have worked with ate better than the locals.

From US: Shelves of packaged/prepared/processed foods and the meat counters in Ohio were empty when the pandemic started. Fresh fruits and vegetables bins were overflowing because no one was shopping for “perishables.”

From Greece: Subscribe to farms. Check the farm in your area and subscribe to get regular boxes of seasonal produce. Subscriptions have quadrupled with the pandemic.

From Brazil: In Brazil we have something called a Basic Bag that people under a certain salary level or on a food stamps program that does not have canned food at all – black beans – rice – flour etc

From UK: In the UK there has been some concern that food parcels for those shielding and more recently for students needing to self-isolate has been poor quality, highly processed and not taking account of special diets whether because of allergies or religious restrictions. Very concerning.

From US: In the US plant-based meals have not been the norm so people look to substitutes — isn’t it part of being culturally relative? So many rich cuisines can be vegetarian / vegan but they are not “familiar” here. Like the example Marion gave about being grateful for having a vegan “burger” instead of saying they love a good aloo masala.

From UK: Re the US being ‘ahead’, I actually meant in terms of the negative trends in food, not the positive ones…although of course the US was a pioneer in many of the initiatives we now think of as part of the Food Movement – so they were the first off the tracks in reaction to the inequalities of industrial food, for good reason….

From US: A cheaper way to educate children about food is by reuniting children with nature and showing them how to gather and eat free food. I understand this is harder in built up areas but urban foragers are finding more and more in the concrete jungle.

From UK: The primary action is re-ordering our insane economic system. The normalisation of the tiny number of global rich getting richer while the rest of us get poorer….. A significant way that happens is because we have tax havens where $25+ billion is parked and used without any taxation paid in the countries where that money was earned. Amazon, Apple, etc, etc. Before the Reagan / Thatcher economic revolution, businesses paid tax —for schools, health, ….in short the social safety net.