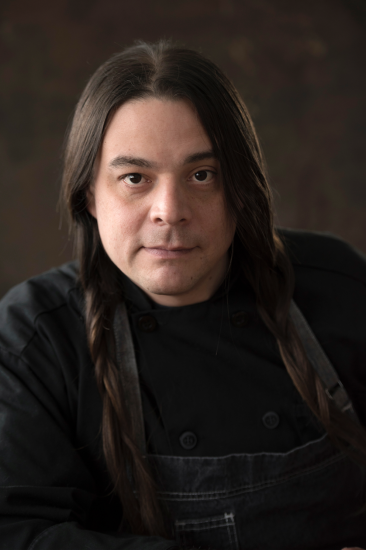 Many indigenous communities around North America (Turtle Island) are reclaiming their ancestral seeds after hundreds of years of disconnection due to colonial violence. Chef Sean Sherman and scholar/writer Elizabeth Hoover tell the tales of seeds, seedkeepers, and indigenous chefs who are bringing traditional foods back into focus.

Subscribe (free) on iTunes here.
Subscribe (free) via Stitcher here
The Symposium paper given by Sean Sherman and Elizabeth Hoover was delivered at the 2018 Symposium on Seeds. It will be published by Prospect Books in summer 2019. All Symposium papers are available to download free on Google Books three years after publication. You can find papers from 1981 – 2015 here.

Elizabeth Hoover is Manning Assistant Professor of American Studies at Brown University where she teaches courses on environmental health and justice in Native communities, Indigenous food movements, and community engaged research. Hoover frames her work through a focus on the importance of community-based research and culturally and socially supported programming. Her book “The River is In Us;” Fighting Toxics in a Mohawk Community, (University of Minnesota Press, 2107) is an ethnographic exploration of Akwesasne Mohawks’ response to Superfund contamination and environmental health research. Her second book project From “Garden Warriors” to “Good Seeds;” Indigenizing the Local Food Movement explores Native American farming and gardening projects around the country: the successes and challenges faced by these organizations, the ways in which participants define and envision concepts like food sovereignty, and importance of heritage seeds. Elizabeth has published articles about environmental reproductive justice in Native American communities, the cultural impact of fish advisories on Native communities, tribal citizen science, and health social movements. In addition, Elizabeth is part of the leadership committee to establish Native American and Indigenous Studies at Brown, and also serves on the executive committee of the Native American Food Sovereignty Alliance (NAFSA), and the newly formed Slow Food Turtle Island regional association.
Book: The River is in Us
Twitter: @bluefancyshawl
Instagram: @lizhoover

Chef Sean Sherman, Oglala Lakota, born in Pine Ridge, SD, has been cooking across the US and Mexico over the past 30 years, and has become renowned nationally and internationally in the culinary movement of indigenous foods. His main focus has been on the revitalization and evolution of indigenous foods systems throughout North America. Chef Sean has studied on his own extensively to determine the foundations of these food systems to gain a full understanding of bringing back a sense of Native American cuisine to today’s world. In 2014, he opened the business titled, The Sioux Chef as a caterer and food educator in the Minneapolis/Saint Paul area. He and his business partner Dana Thompson also designed and opened the Tatanka Truck, which featured pre-contact foods of the Dakota and Minnesota territories.

In October 2017, Sean was able to perform the first decolonized dinner at the James Beard House in Manhattan along with his team. His first book, The Sioux Chef’s Indigenous Kitchen was awarded the James Beard medal for Best American Cookbook for 2018 and was chosen one of the top ten cookbooks of 2017 by the LA Times, San Francisco Chronicle as well as the Smithsonian Magazine.This year, Chef Sean was selected as a Bush Fellow. The Sioux Chef team of twelve people continues with their mission to help educate and make indigenous foods more accessible to as many communities as possible through the recently founded nonprofit North American Traditional Indigenous Food Systems (NATIFS). website: www.natifs.org.
Twitter: @Chef_Sean
Instagram: @the_sioux_chef

© Oxford Food Symposium on Food and Cookery 2021
Site by Igloo