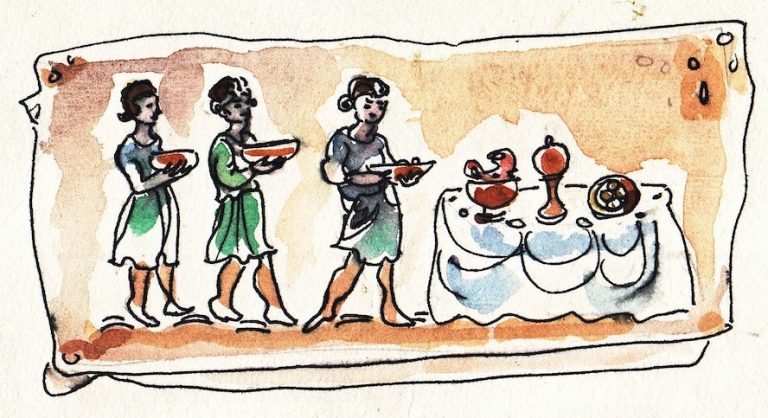 Kitchen Table No. 7 – digest from the chatline

Is the Kitchen the New Venue of Foreign Policy? The Conflict Cuisine Project

How can immigrant communities make the best of what comes naturally – cooking good food for the family? Communication is the name of the game, agreed Johanna Mendelson Forman and guests Alaa Aloriri, Noobtsaa Philip Vang and Elaine Chon Baker.  At our seventh gathering round the Kitchen Table, Symposium trustees Gamze Ineceli and David Matchett hosted a wide-ranging discussion on the power of food to make a difference not only to everyday community relations but by influencing decisions made by politicians at home and abroad.

THE SITUATION AS IT IS NOW:

You can always tell what country is at war by the newly opened restaurants. It also indicates where economic crisis has required economic migration. We will also increasingly have climate migration (and war). It’s already happening and will accelerate more and more. Obviously in the Middle East it’s a serious crisis: Turkey now has four million Syrian refugees who speak a different language.

If you can give a student a meal, they will be very happy.  ‘Genuine home-cooked meals’ –  so much better a description than ‘authentic’.  The life cycle of women is [already] in providing food and beverage.  [Culinary skill is] one of the few things people are able to bring with them when they flee. The first generation doesn’t lose the taste for their family’s food.  And the third generation often tries to recover the language, in addition to studying the food. Food-people are some of the hardest working people in the world. And they have an optimistic spirit.

WHAT’S IN A NAME?

Gastrodiplomacy. Citizen Food Diplomacy.  Forming Connections. The Live Project. And then there’s “Culturally-appropriate meals” —such a wonderful change from the early 20th century assumption in the US we should be a ‘melting pot’ of cuisines—i.e., immigrants should ‘eat American’—meat, white sauces, and relatively few raw vegetables.

There are always prejudices that come along with newcomers.  There are always places of distrust: one of the challenges in a fragmented rebuilding of disrupted lives.  Food can definitely build trust. Food enterprises work better than others: as a general rule, woman-owned businesses are more solid.  Familiar foods are the first and easiest bridges between people.  Innovative thinking – adaptability – is the way to survive.  Women have to prove themselves in business more than men: there are a number of well-known lending-programmes that focus on women with the aim of promoting women in business, but also because women are usually better at repaying the loans.  Marginalized communities are the best bet because they’ve had to figure hard things out for themselves. Women are better at nurturing their teams.

Alaa talked about the concept of Nafaaz [dictionary translation: gift of God] – the idea of sharing kitchens.  So much more humane!  Living on an island, we have seasonal workers in restaurant kitchens who call themselves ‘workers’, so I started to think how we can make them ‘locals’: [after listening today] I would put them in a kitchen so they can cook together instead of only serving the food.

I guess you need to explain ingredients, then the metrics. Sensory measurements – wonderful idea to keep measurements and even techniques intuitive.  Poetic cooking – memory cooking. Such a nice idea to use the cook’s words, a pinch or dash or sprinkle. Measurements might be a handful of flour or sugar, which also depends on the size of the hand. My mother always used to say “to taste” when I asked for quantities – now I say that myself. Quantities are one of the biggest challenges of conveying a recipe.  1 kilo of apples can end up with different amounts of actual food in the dish depending on how small the apples are which leads to a higher or lower percentage of waste etc – also who cuts them and how.

There’s always a need to find replacements for ingredients that are simply unavailable.  And ingredients vary according to season, terroir, etc. Isn’t the goal not to mimetically reproduce, but to understand?  I have an older Indian cookbook that lists all recipes in metric and Imperial measurements to address multiple food cultures as well.as substitutions for terms like coriander/cilantro or aubergines/eggplant.   I’ve encountered the problem in my work with a number of refugee communities, especially in my small town of 40,000 people, looking for Ugandan ingredients. As an immigrant twice over, the search for the taste of home animates me. An interesting thing with diaspora, people are already thinking about substitutes, and then discover tastes in the homes of others. One of the saddest thing for me about staying home during this pandemic has been missing going to all our different immigrant groceries to find specialty ingredients.  Home cooks take huge pride in their original dish, which can be a problem when tackling a different way or subsituting ingredients. I worked with Afghan refugees in London, and women started substituting leek for gandanak (a wild allium that grows in Afghanistan, but can’t grow in the climate here)

I have run research labs with mainly women, and collaborated in research and writing, and, on average, I find women more collaborative and better at working across themes and disciplines. Many women are called cooks not chefs, especially in smaller restaurants.  Women are more compassionate and care about little things.  And women in general don’t think they’re better than everyone else.  In the Southern Hemisphere the majority of families do not have a man in the house – it’s mostly women because the men go away to work in the construction business and leave their families.