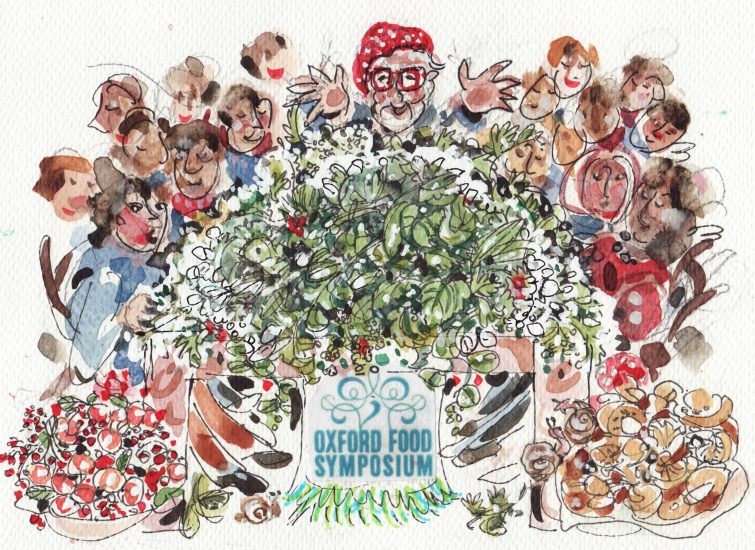 The Kitchen Table took a walk on the wild side with five enthusiastic foragers. Elisabeth Luard masquerading as Roger Phillips (result of a health emergency from which the world’s most eminent forager has now fully recovered) conducted a visual tour (following Roger’s guidance) of the edible fungi of the Hebrides.  Pembrokeshire farmer Jessica Seaton, author of Gather, Cook, Feast, shared recent foragings in Welsh valleys; teacher and chef Alex Blagdon took her gathering-basket along the fertile shores of Newfoundland; Ümit Hamlacıbaşı explained what she’s learnt from the women of Bozcaada, an Aegean island off the coast of Turkey; Elisabeth Luard rounded off the gathering with glimpse of the lost botany of the transhumancing road to Ronda in Andalucia.

Roger Phillips (in absentia) is a world-wide forager and mushroom expert par excellence.  He says: “Fungi are vital to the health of our planet – without them, we’re in serious trouble”.  It took twenty years for Roger’s intensively-farmed field in South West England to recover sufficiently from previous mono-cropping to produce a delicious little crop of bluets ((Tricholoma nuda) fruiting on regenerated mycelium. Following Roger’s guidance, Elisabeth Luard explores her fungi experience with paper and paint.

NOTES: In France, you can go to a local chemist and they will identify a mushroom for you.  “This is true in theory, says the recommended website, and the service is free. In practice, not all are equally competent. There are 35,000 kinds of mushroom in France and no pharmacist will know them all. However, all pharmacists should, in theory at least, be familiar with those that grow in their area and that are dangerous.”

CAUTIONARY TALE: “Someone who worked in my lab was a national expert on mushrooms in the US.  Once he flew too close to the wind and ended up in the emergency room. As he lay on the gurney, the doctor was on the phone, trying to reach the expert on their phone list, Evan C. Evans. ‘But I AM Evan C. Evans!’shouted the patient.”

NOTES: Fat hen was eaten in Neolithic times and is a popular green in India. The very young central leaflets of ribwort taste of mushroom-cum-asparagus.

Most edible leaves, as they get older, can be chopped and stir-fried, as for dandelion-leaves, and are wonderful in soups. Ground elder is another widely-available green. Cook alexander stems as you would asparagus and use the seeds to replace black peppercorns.

CAUTIONARY TALE: “It’s absolutely essential now, given its recent growth, to regulate commercial foraging as unbridled picking for profit will contribute to further extinction and biodiversity loss. Foraging for personal use is good but I think we all need to learn from the botanists about how much to pick. The accepted rule of thumb – 20% of the plant – may not apply at all but to some species.”

Chef Alex Blagdon gathers and teaches in Newfoundland (you’ll find her at www.aldercottage.com)

Alex says: “Always follow the foragers’ rules and show respect to nature.”  Gatherings discussed include pineapple weed (camomile), blackthorn, beach-greens (oyster-plants) but most particularly alder, a year-round forage – useful at all stages – that grows so prolifically people treat it like a weed.

NOTES: The nutritional value of wild foods is very high, even if only counting minerals: phytonutrients (phytochemicals) are just as important to support our various functions including immunity.  Blackthorn shoot plus rose petals infused in vodka gives a bitter almond flavour. Male alder catkins give citrus notes when young; when mature, more like black pepper when toasted. ‘Pineapple weed’, wild chamomile, is used to make a calming medicinal tea; it grows on compacted ground, the flowers hardly have petals and smell strongly of pineapple when crushed. To preserve mushrooms in brine, sautée quickly before preserving to prevent them going very soft and mushy.

How Ümit Hamlacıbaşı learned to forage on the island of Bozcaada, off the coast of Turkey.

Ümit says: “What’s important is timing, finding, and uses in practice. After I came to the island from Istanbul and started learning from the islanders, it was all just green to me. Foraging ties us so beautifully to the rhythms of the land.”

NOTE:  The dried flowerheads of the Mediterranean horehound / kandil otu, as the name suggests, can be used as a wick for an oil-lamp (candle).

Natural history artist (retired) Elisabeth Luard laments the disappearing botany of the transhumancing road to Ronda that provided forage for man and beast between the fortified hill-town to the port of San Roque in Andalucia.

Transhumancing routes, along which forage was available to all – villagers as well as herdsmen – for one meter on either side of the paved road, allowed travel – on two legs or four – from one place to another throughout Spain.  An important source of edible greens, almonds, olives, herbs, snails (a valuable protein source), fodder for hutch-rabbits and chickens, esparto grass for mats, baskets and cheese-draining containers, these routes also provided a food-source for insects, mammals and birds (both resident and migratory on the passage from Europe to Africa). My illustration is the result of working in site on a visual record of the botany of the Ronda road for the UK’s Botanical Research Center at Kew Gardens circa 1975.

NOTES: Sweet violet, Viola odorata, has for example (at least) 7 butterflies, 5 moth caterpillars, a sawfly, 2 aphids, and more insect species as its partners… fascinating and relevant to understanding its life.

Miles Irving’s The Forager Handbook (collaborates with chefs on what, when and how). CONCLUSION: “What Ümit said about it “all being green to her at the start’” is so important: if we all had just a scrap of knowledge, it would completely change our relationship with our natural surroundings. Just learning ten wild species could be a tipping point.“