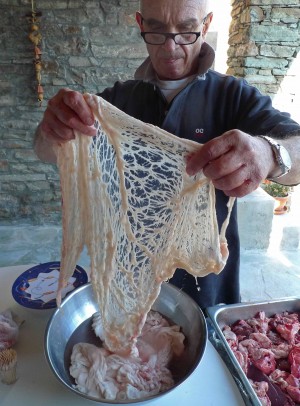 Kokoretsi and other Greek Easter Delicacies

Symposiast Aglaia Kremezi on the most sought after Greek Easter delicacy

The mass slaughtering of Easter lamb reaches its peak the week before Greek Easter and not just vegetarians but even meat-loving Americans, and Europeans express shock at the site of whole, head-on carcasses of young animals spit-roasted over charcoal fire. They are even more appalled seeing the animal’s entrails – the liver, lung, and sweetbreads – meticulously threaded and enclosed in the caul fat, wrapped tightly with the intestines in order to make kokoretsi, the most sought after Greek Easter delicacy.

Perhaps there should have been an editor’s note or parental advisory rating at the beginning of this piece, given the somewhat graphic nature of the material, but I hope since many of you made it through this year’s Symposium on Offal, you can continue a bit further. Greek Easter rituals seem barbaric to some, but they are deeply engrained in our culture as the central rite of one of, if not the most important, celebration of the year.

Sheep and goats roam free on the hilly and rocky Aegean islands. The ubiquitous dry-stone walls cannot contain them and they even jump over higher fences in order to devour every green plant in sight. The part-time shepherds who own and milk them let them graze wherever there is free or semi-fenced land. If a large percentage of the animals was not slaughtered for the Easter table no plant would survive the spring, and already destitute islanders would be left without horta – wild greens – the staples of the traditional diet the most of the year. Already large parts of the island landscape are bereft of spring flowers; only the most ominous-looking thorny bushes and some oleanders manage to escape the wrath of lamb and kid alike. Sheep, and especially goats, don’t just nip the tops of the spring greens, but often uproot the plants at their base, destroying their ability to regenerate in future growing seasons.

Therefore, even though we seldom eat meat, we think that it is ethical to kill and consume lamb and goat every now and then, as our ancestors did around the Mediterranean since the dawn of civilization. And we are not wasteful. Once an animal is killed all its parts have to be consumed so that as many people as possible can feast on a bony, 25-pound (13-kilo) spring lamb. Eating offal is not strange but sensible, and ecologically friendly. Meat-lovers and haters, accustomed to neatly-packaged pieces of flesh, turn their heads, disgusted at whole carcasses that remind them of the living animal. They cannot bear to look at a roasted lamb’s head, which most people in this part of the world consider a precious treat. Although I understand and sympathize with the vegetarian worldview and position, context is important, and relatively poor Greek villages are a far cry from the Whole-Foods-like franchises across the world. Nothing angers me more than the hypocrisy of meat-eaters who turn-up their noses at the Easter roast. I fail to understand how the ‘frenched’ leg of lamb available at posh restaurants is more ethical than the whole Easter roast.
Although, as I said, we seldom eat meat, we do feast on Easter lamb and kokoretsi. Saturday night, after the resurrection mass, Greeks break the traditional forty-day Lent with magiritsa, the Easter soup of leftover diced offal, intestines, lettuce leaves, spring onion, and dill, flavored with creamy egg and lemon sauce. We sincerely hope our vegetarian friends won’t consider us ‘offal’ and be terribly offended…

According to folklore Roumeli (central Greece) is the home of spit-roasted lamb and kokoretsi. Islands had different cooking traditions but now spit-roasting Easter lamb or kid has become the norm all over the country. Still Roumeliotes (the inhabitants of central Greece) are considered the experts, and as I can attest after tasting our friend Yannis Ziogas’ lamb and kokoretsi a few years ago, his was by far the best I have ever eaten. I photographed Yanni, our island’s pharmacist and roast maestro, threading the offal and wrapping the kokoretsi with caul fat and a double layer of intestines the day before the roast. Unfortunately, when I returned at noon on Easter Sunday, the kokoretsi was already taken off the spit, after about four hours of roasting high above the charcoal fire with the final 30 minutes closer to the embers to achieve a crackling crust. I was so eager to taste it – unbelievably delicious – that I forgot to take a picture of the cooked kokoretsi. The picture is from another year, when we feasted on our neighbor Stathi Allamani’s kokoretsi. It was equally delicious! Stathi comes from southern Albania, the country believed to be the origin of kukurec as it is called there. That particular kind of spit-roasted kokoretsi is somewhat different from the Turkish kokoreç that obviously shares the same origin.

Text and Photos © by Aglaia Kremezi