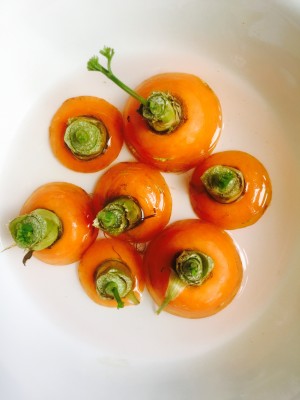 Whoever heard of Vegetable Offal?

It’s because I’d enjoyed last year’s Symposium so much that I was disappointed to hear that the 2016 theme was ‘offal’. I won’t be able to come then, I said, I’m vegetarian so it’ll be of no use to me. But there’s vegetable offal: discarded bits of fruit and veg such as the peel, seeds and stems, said Bee Wilson, Diana Henry and about half a dozen others. Vegetable offal, I laughed. They’re just being polite, or it’s just a ruse to get more people to attend, I thought. Whoever heard of vegetable offal?

Then I started thinking about it. And the first thing that came to mind was ginger peel that my mother accumulates in a container every time she uses fresh ginger in her cooking. The peel goes to flavour her much-loved masala chai, fragrant with cardamom, black and white peppercorns, an extra oomph of fresh ginger and, in winter, Indian lemongrass and mint leaves. If she’s feeling extravagant,very occasionally she’ll add a pinch of saffron. The peel can also be stored in a caddy to perfume tea leaves, a bit like making vanilla or cinnamon sugar.

I also thought about my mum’s cauliflower stem pickle, in which the stems and stalk are marinated in coarsely crushed fenugreek and black mustard seeds, red chilli powder, asafoetida, salt and a little oil. You can eat it straightaway or, better still, after about a day or so. And I thought of her adding sprightly leaves of white mooli radish to ‘thepla’ (spiced Gujarati flatbreads); and her ‘muthiya’ (spiced steamed and sometimes fried Gujarati dumplings) flavoured with the peel of ‘karela’ or bitter gourd.

I thought about mum’s chutney, too, made from the peel of ‘dudhi’ (snake gourd) or ‘turiya’ (ridge gourd). These are ubiquitous Indian vegetables, and their peel is sautéed with Bengal gram and whole garlic cloves. Then unsalted peanuts or cashew nuts, sesame seeds, green chillies and fresh coriander leaves are added; and the mixture is blitzed into a blender, finished with a generous squeeze of lemon juice.

This vibrant green chutney – more like a dip or relish by Western culinary standards – is eaten with fried snacks like pakoras, or as part of an everyday thali meal. ‘Dudhi’ and ‘turiya’ peel (you can substitute courgettes) is also cooked as a Gujarati side dish: chickpea flour and powdered spices such as red chilli and turmeric are added, the pan is covered and the vegetable is left to cook on low heat without stirring.

Like my mum, many Gujarati housewives make ‘fajeto’, by soaking mango peel and stones in water, then rubbing them gently but vigorously until all the clinging mango bits come off. The mango water is then blended with yoghurt and spices – notably dried powdered ginger – to make a seasonal variation of the popular ‘kadhi’ (spicy yoghurt ‘soup’). Then there are thrifty Jain housewives, who make a curry of whole pea pods – and deftly removing the pale green ‘peel’ from each side of the pod with a knife is a skill that can take years to master.

Like Gujaratis, who make a curry of whole, peel-on bananas cut into two or three pieces, stuffed with chickpea flour and spices, South Indians, too, put banana peel to good use. They chop it in fine strips and sauté it with black mustard seeds, curry leaves and fresh coconut to make a ‘thoran’. Using similar spices, they make watermelon rind and split yellow moong bean ‘kootu’. Whole, unpeeled garlic cloves are used in Konkani cuisine of the western coast of India; and Goans dry the seeds of jackfruits that they grow in their gardens, adding them as a star ingredient to flavourful hot and spicy coconut-based curries.

Going back to the cauliflower stems, Punjabis make a spicy curry from these, along with the surrounding leaves – both of which are sold as delicacies in north Indian vegetable markets. Bengalis have a popular stir-fry of potato peel with poppy seeds, served as an accompaniment to dahl and rice. This unusual item is said to have originated in the kitchens of Bengali widows, who were once treated as social outcasts and confined to an austere vegetarian diet. I have given both of these recipes below.

You’ll find many, many other uses of ‘vegetable offal’ in Indian regional cuisine. Not only were women of my mother and grandmother’s generations resourceful and economical in their cooking, but somehow they also instinctively knew the high nutritional value of peels, pods, seeds and stems. As is generally the case with Indian food, they turned humble, often unloved, ingredients into gourmet dishes with the magic of spices.

Powerful seasoning is certainly key to making vegetable offal dishes work; and another thing is taking the time to trim and remove stringy bits from coarse stems and stalks. It’s definitely worth the effort. You want to feel like you’re discovering a brand new vegetable, not chomping on old leather.

While cooking and photographing recipes for this post, I was reminded of when my sister and I were children. Our parents would often encourage us to place discarded carrot tops in a saucer with a little water, which we would put on a windowsill. They’ve recently told me that this was just a simple, fun way of enabling us to connect with nature, to discover where vegetables came from and how they’re grown.

The carrot tops would sprout green leaves after several days (you have to keep the water topped up), which would be harvested and added to flatbreads. I loved running my little fingers underneath them, giggling at their slithery, mucky sliminess. I wish I’d paid more attention to the flatbread recipe in which the leaves were used.

I still won’t be attending this year’s Symposium – there’s too much meat for me on the menu. What I’ll do instead is cook up a feast of the various dishes I’ve mentioned here. Maybe we’ll raise a glass – perhaps of Toast, http://www.toastale.com the delicious new beer made from surplus bread – to all green things discarded and delicious.

This recipe uses mustard oil. If you don’t have it, you can easily substitute sunflower or groundnut – in fact, some people might prefer their more neutral taste to the distinctiveness of mustard. Amchoor (sundried green mango powder) is widely available in Indian grocers and large supermarkets in the UK; but if you can’t find it, add 1 tablespoon lemon juice instead. Don’t waste the ginger peel either – use it in your tea.

1. First, prepare the cauliflower. Trim and slice the hard stalk at the bottom, removing bits that are very coarse. Pick the leaves off the stems and slice them. Using a vegetable peeler or paring knife, remove the stringy bits from the back of the stems, like you would peel celery ribs. Cut the bigger stems into 2 or 3 long pieces each.
2. Blitz the ginger and garlic in a small mixer and set aside.
3. Heat the oil in a pan. Add the cumin seeds and let them splutter for a few seconds (be careful not to burn them).
4. Add the onion and fry until it starts to brown. Add the ginger-garlic paste and red chilli, and cook for another minute or so.
5. Now add the cauliflower stems and stalk (but not the leaves), salt and turmeric powder. Sauté for a couple of minutes.
6. Pour in the water, cover and cook for 15-20 minutes until the vegetable is tender.
7. Add the remaining spices, tomato, and the leaves. Cover and cook for another 5 minutes.
8. Garnish with coriander sprigs, and serve hot with roti or naan.
Makes 2 portions

A side dish with a distinctly earthy taste. If you don’t have mustard oil, white poppy or nigella seeds… I’m afraid you’ll need to buy them, as they’re essential in this recipe. Do not substitute the more common black or blue poppy seeds – they’re not normally used in Indian cooking. Some people add garlic or slit green chillies to jazz this up – and a pinch of sugar to neutralise the earthiness – but I’ve stuck to the traditional basic recipe.

1. Wash and scrub the potatoes well. Peel them in long strips, pressing down firmly so that you get a little of the potato flesh as well. Stack up the peels and cut them in long, thin julienne slices. You should have about 1.5 cups.
2. Heat the oil in a small pan, and add the nigella seeds.
3. After a couple of minutes, add the potato peels, salt and turmeric.
4. Stir-fry for around 15-20 minutes until the peels are tender, stirring frequently. Add 2 – 4 tablespoons water as needed, a little at a time, if they start to stick to the bottom of the pan.
5. Add chilli powder and poppy seeds, stir well, and cook for a couple more minutes. Serve immediately with steamed rice and dahl.
Makes 1 portion

Sejal Sukhadwala is a London-based food journalist who has been writing about food for a number of newspapers, magazines and websites for over 14 years. She can be found on Twitter at @SejalSukhadwala and on Instagram at sejalsukhadwala