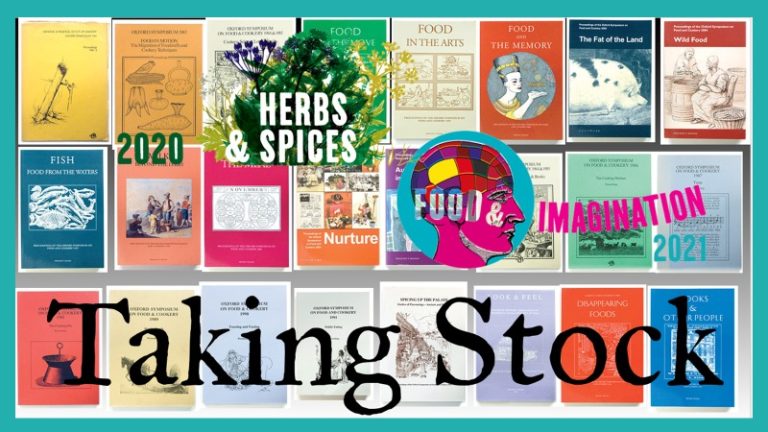 Let’s get together, and take stock – a digest from the chatline

The last Kitchen Table before the Symposium Weekend was hosted by OFS trustee David Matchett and guests, including rather a lot of familiar faces, so we could all take stock of where we were, are and hope to be in the future.  While we don’t record these gatherings (what’s said at the table stays at the table) what follows is a digest of the chatline – but with a little more explanatory commentary than usual.

The first small gathering, forerunner of what became The Oxford Symposium on Food & Cookery, took place in 1979 in St. Anthony’s College with about twenty participants brought together by founding-father Alan Davidson and philosopher Theodore Zeldin.  The second – and the first to be called The Oxford Symposium – was held in May 1980 with about seventy people. At that time, food and cookery was not accepted as a scholarly subject.

The meals became important when we suddenly realized there was a gastronomic aspect to what we were discussing.  It sounds so long ago – and yet it’s still so now. Circa 199I, when I applied to do an Art History Doctorate in food as an art form and couldn’t get a notable local university to take me seriously.  How our world has changed since then.

EXPANDING THE TABLE, IMPROVING THE PLATE

We’ve had so many unforgettable meals after we moved to St. Catz.  Working with Tim Kelsey and his team along with our invited chefs, menus that reflected the year’s subject included Fergus Henderson’s bone-crunching whole roast quails, Jacob Kenedy’s exquisite mullet-livers, Fuchsia Dunlop’s seminar on oral appreciation of smoked duck-tongues, Jeremy Lee’s stupendous Feast of Cockaigne. All illuminated by Jake Tilson’s utterly gorgeous, elaborate and complex menu cards, collectable artworks in themselves.

The atmosphere at St Catz – with its long egalitarian tables in the dining-room and generous outdoor space in the gardens where people can gather, take a drink together and wander – has provided astonishingly fertile ground in which ideas take root and grow.

Our Young Chefs programme, expanded from early beginnings by Harold McGee, is now in the capable hands of Trustee Elaine Mahon, previous recipient of a Young Chef award, which shows its importance to the next generation of food-professionals, many of whom are still involved with the Symposium.

The first digital symposium in 2020 happened at an extraordinary time, when the world was half a year into the pandemic and a vaccine was a distant hope. We were isolated and scared (and many other emotions) and the Symposium brought out the best in so many of us.  Round of applause for the brilliantly agile Ollie and his team at Igloo for designing the website – it exceeded all our expectations!

The new website has been an astonishing opportunity for outreach, and the team is working hard to keep that access. It’s so great that paper presenters can be part of it even without traveling. An expanded community, truly.  I had read about the Symposium before, but never thought I would be able to attend, because I can’t afford overseas travel.

The Kitchen Table has become such an important monthly event in our lives.  I remember the first one with Scott (Barton) and Marion Nestle, with so many brilliant ones following. They really carried us through the pandemic.  Great themes and conversation – informal and therefore not recorded. And I really appreciate the Facebook page for keeping us up to date with Kitchen Table and all else.  Twitter and Instagram too.

And the monthly Wiki Club – just as beautiful an endeavour as the Young Chefs – has expanded our view and stretched our capabilities, thanks to Wiki-expert Roberta Wedge who fills the monthly gatherings with content and sense and purpose.

AND FINALLY…Janet Beizer, our closing Keynote at last year’s virtual Symposium, captured the spirit of what and who we are in her last words in 2021: “The Symposium has become a kind of intellectual and social  – and even emotional – home.”  Amen to that!