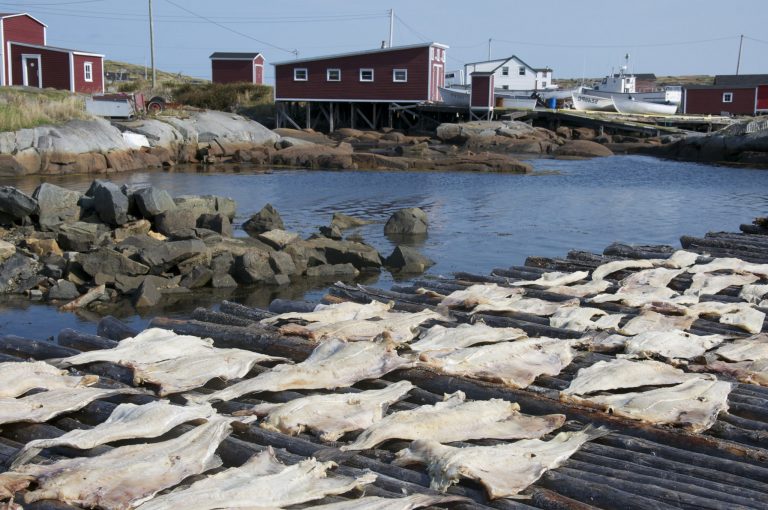 The Stubborn Cuisine of Fogo Island

Not all chefs with a barrowful of culinary laurels would consider taking on a challenge such the Fogo Island Inn, brain-child of island-born dynamo Zita Cobb (Symposiasts will remember her inspirational presentation at Food and Power last year).

But for Executive Chef Jonathan Gushue and Executive Sous-chef Tim Charles, our Friday evening v-chef, the challenge was irresistible. Born and bred in the region, both men knew the territory and were well aware of the pitfalls and pleasures of setting delicious food on the table that reflects a landscape in which everything is hard-won.

Jonathan joined Tim – his trusted right hand – in 2018, the Inn’s sixth year, when the cooking at the Inn was already attracting admiration from critics more used to dining in Toronto, London and Manhattan. The result is that one of Canada’s best known culinary magicians was soon foraging, gathering and cooking in a state-of-the-art kitchen in one of the remotest places on earth.

Dining at Fogo Island Inn – for those who are fortunate and adventurous enough to make what’s already become a gastronomic pilgrimage – is an unspoken invitation to learn all there is to know about this remote and beautiful island. Chilled by the Labrador current way out in the North Atlantic, ice-girt, sun-washed, impossibly lovely at any time of year. Described by Zita (modesty is allowed the island-born) as a bald-topped island moored to another island moored to a faraway corner of the North America mainland.

And there’s the beauty of it.

The island’s inhabitants, some two and half thousand descendants of a fishing community established some four centuries ago as safe-harbour and cod-salting-station using salt imported from the Caribbean in a three-cornered trade with London. Empty seas – result of overfishing by deep-sea trawlers in the 1950’s – left the islanders without their traditional livelihood. After years of strictly enforced quotas, the shoals are now returning.

“What we’re trying to do,” says Zita. “Is respect the land and our traditional way of life by connecting people to nature and culture through food.”

Up to a point. First you have to know exactly what you’re doing in the kitchen: Tim and Jonathan see to that. Next comes choice of ingredients. Seasonal and local goes without saying – but as all islanders know, this is not just a matter of checking the storecupboard and ordering up what’s missing. Nature does what she does in her own good time, and all those who depend on her must pay attention. When the snow crabs are in season, a fisherman must put to sea and empty the creels. If the cloudberries are ripening from green to red to gold on a faraway headland, someone has gather them one by one from their delicate stalks. Nothing good can be done in a hurry.

What follows is the menu that Tim suggested when we were planning to feast together in person at the long communal tables in St. Catz. Not this year – maybe next. Everything worth having is worth a wait.

So shut your eyes and imagine you’ve made the journey from the mainland and are ready for what’s about to happen in the glass-walled dining room of the Fogo Island Inn. You’re tired and happy after a day exploring the island, gathering herbs and berries from the heathery uplands and wandering along the tide-line with someone who knows what’s what.

Listen, as you take your seat at a table by the window, to the sound of the ocean far below, admire a flock of roseate terns, dainty as dancers, dipping the waves for fish, watch the sun slip towards the horizon in a blaze of scarlet and gold.

Don’t open your eyes quite yet.

Pick up your virtual gathering-basket and fill your imagination with salty-juiced sea-rocket, Cakile edentula; a pod or two of beach-pea, Lathyrus maritimus (don’t eat too many); search the rockpools by the shore for bright green bunches of sea lettuce, Ulva lactuca – delicate and delicious.

Now make your way into the uplands for the glory of the island’s berries, none bigger than a thumbnail, that grow close to the ground and ripen from bud to blossom to berry in double-quick time, nature’s reward for the long months of winter. Common names explain their usefulness, or where they grow, or record the birds that feast on them – cloudberry (aka bakeapple), partridgeberry (aka lingonberry), blueberry, cranberry, crowberry (aka blackberry – a cause of some confusion among non-islanders), grouse-berry, marshberry, ground-hurts, creeping snowberry….

Home is where the heart is. Time to enjoy the v-feast.