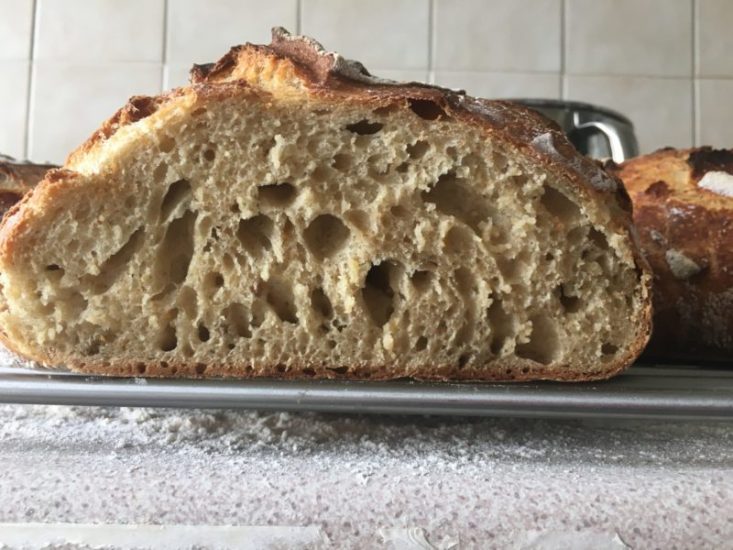 Baking and Filming for the V-Symposium

I was filled with excitement when I was asked to film an opening piece for the V-Symposium with Claudia Roden.

And also – if I am honest – a bit of fear given the responsibility. That tinge of fear meant I triple checked the cameras for charged batteries, clean memory cards and recording formats. Tripods were checked, microphones tested and for good measure some filming in my friends garden to verify lens-choice.

I was thus well armed when I arrived in the leafy London suburb to do the filming. I was also at the time being extra cautious about getting sick so had been strict about outside contact and felt comfortable that I was not a carrier of Covid-19, the common cold or any other ailment, mental conditions being naturally excluded from this health statement!

I was warmly received by Claudia in her garden with coffee and snacks, and in between sipping my coffee and chewing on some dates, I was setting up equipment and scouting the best spot in the garden for filming. With the location decided and all the equipment set up, Claudia, being the consumate professional, offered a number of wardrobe alternatives for the filming. But I assured her that she looked lovely already and the colour was perfect for the camera – neither too dark nor bright. We also used a garden table as a prop, which I would happily have used bare, but Claudia suggested a tablecloth, which did look much better and emphasised the need for a women’s touch. The process of filming went really well, and was completed in two and a half takes, mostly because I was picky: when filming, more is always better than less.

Afterwards we had a lovely chat about food, life experiences, politics and heritage. It was getting dark by now. Which was my cue to pack up, have the last sip of by-now cold coffee and a last delicious date and drive back to home to edit the opening video, which I hope everyone will find as enjoyable to watch as the filming was for me.

I had started my journey with this year’s subject back in October 2019, with the idea of making spiced breads as a small contribution to the meals over the weekend. I wanted to bake a bread that is delicious and intriguing that encourages conversation and hopefully someone walks away with new ideas about bread. So, armed with my new spice grinder and a copy of Jill Norman’s Herbs & Spices, I spent a few evenings after work reading through the book and deciding on a few possibilities. Turns out the results are decidedly mixed, I used the spice sparingly to start with because I did not want it to overpower the bread.

So this was not going to be simple or easy. The sourdough process of leaving the dough overnight plays a big part in the flavour, so not only had I to contest with finding or dreaming up a spice-mix that would be delicious, but it would also need to survive the assault of bacteria and yeast in my fridge overnight, and then face the final battle for flavour longevity in the oven.

I began experimenting with different types of flour, emmer, khorasan, einkorn my own grounded rye and a great quality- type 55 (550 if you’re German) – and white flour from Shipton Mill (good enough for the Queen). The different types of flour bring additional flavour and texture. But for me good bread starts with the scent. It should smell amazing, a bit of nuttiness mixed with toastiness as the crust browns. It should have a crust that cracks and tears, it should be soft yet chewy. It should keep well and taste good right through its shelf-life. My boss at the bakery where I learned to bake, used to say all warm bread tastes great but the true test is when it’s cooled.

The journey, however, has reminded me of the symposium’s mission: to change the conversation, expand the table, improve the plate. Science allied to art produces good food. Science tells you that certain spices are water soluble and others are oil soluble, which affects the taste. Art is what enables you to decide which flavours work well together.

I am excited to have made the bread-experiment because I have been able to expand friends and family’s tables with new flavours while doing virtual bread courses during the Covid-19 crisis. I am also excited because I am now thinking about flavour in a whole new way and looking forward to applying this to my everyday cooking. Even though I was not to be able to share some of these tastes in person with fellow Symposiasts, it was worth it in the end.