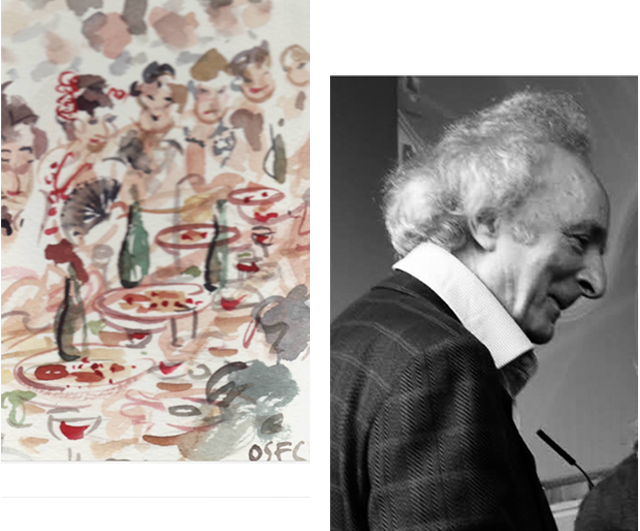 Our founding Symposiast Theodore Zeldin  – Palestine-born Emeritus Fellow of St. Anthony’s College, philosopher, historian of all things French, seeker after happiness and intelligent conversation – provided an introduction to the Symposium’s 2011 cookbook, Celebrations, published to mark our 30th anniversary. As President of The Oxford Muse, you’ll find the professor’s thoughts, videos and paintings at www.oxfordmuse.com.  Meanwhile, here’s Dr. Zeldin’s thoughts on who we are and what we do:

“When we started the Oxford Food Symposium, we were attempting to make a break with the past in three ways.  First of all, we proposed that universities should give as serious attention to gastronomy as to astronomy or any other subject in their syllabus.  Secondly, we invited non-academics, food writers and chefs and others to join us, so that we would not be a purely academic institution, but would benefit from the large number of knowledgeable people outside the universities who had interesting experiences to share. Thirdly, we combined the tasting of amazing meals and unusual ingredients with discussion of how we have come to eat and cook the way we do. Instead of just publishing the essays which our members wrote about particular foods and about more general topics raised by food, we decided to meet to engage in conversations and debates about a different theme each year.  We called ourselves a symposium because convivial discussion was a central part of our project. We liked the idea of people with different temperaments meeting and inspiring one another’s imaginations.

​”At the time of our foundation, my colleagues at St Antony’s College, Oxford smiled sceptically at what they took to be a maverick excursion into unknown territory (I also started a cordon-bleu restaurant in the college, to compete with the institutional food served in Hall). Only one of them – the great Indian historian Tapan Raychaudhuri – ever attended our meetings, for they were too busy with the supposedly graver issues of politics and economics. But we did attract members from other colleges and universities, and gradually our initiative was followed in other countries, to the point that today there are university departments and graduate degrees in the history and culture of food in an increasing number of universities, and even Universities of Gastronomy. Our first objective has been attained, but only partially. We remain different in that we are focused not on teaching, but on the advancement of knowledge: we resemble a research institute, in that we encourage research, although we are a network rather than a building, and meet only for one grand week-end event each year. Our members come from many nations.   We hope our readers will be encouraged to embark on original research of their own.

​”Our second goal remains important, because despite the vast expansion of higher education and the proliferation of specialised courses, so that there are now many more highly trained experts in cooking and food, we are very keen on benefiting from the input of non-academics.  One of our very first recruits, Elisabeth David, who was not an academic, said that of all the honours she received, the one she valued most was being elected a Fellow of the Royal Society of Literature. We see humour and art and theatre and fantasy as integral parts of our mission.

​”Our third goal, of remaining convivial, has survived and our meetings are as entertaining as they are instructive. We have deliberately limited our numbers because large organisations can easily become anonymous and bureaucratic. We are aware that there is a strong case for having regional meetings to accommodate the growing interest in our activities, but we will need a generous benefaction to fall from the sky to make that possible.”