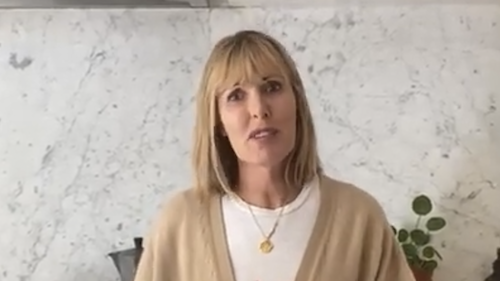 From the virtual OFS editing-suite with Elisabeth Luard and Gamze Ineceli: Volume 3

From the Chatline with Chef Skye Gyngell of Spring Restaurant in London, at the 2021 Symposium Weekend on Food & Imagination:

Reconnecting to the Past:

I have a wonderful photo of vegetable growing around the Albert Memorial opposite the Albert Hall in London in wartime.

Under lockdown, we yearned for access to fresh grown veg which brought back a sense responsibility towards our farmers.

Although I don’t have the space on my tiny roof top to grow anything other than herbs and edible flowers, I did develop a fun relationship with one of my local greengrocers, a super-friendly older man from Turkey whose mother lives nearby and grows some of the veg he sells in this store. Whenever he gets anything exciting he will wave me down when I walk by to tell me all about it, so I’ve started to cook with greens and veg I haven’t really in the past.

Skye’s guiding principal is the closest possible collaboration with the farmers, producers and growers who supply the raw materials that dictate the day’s menus.

She sources seasonal produce directly from the market-gardens and farms of the UK all year round.

I feel very lucky to have a great farmer’s market in NYC and a stunning Amish farmer who drops off the best milk, eggs etc…

We buy from roadside stands, seasonally, and look forward to the rhubarb, asparagus, strawberries, eggs, tomatoes…. I know so many of the farmers now, which feels so right that you are connected to what you eat.

I “cooked blind” for several pandemic months because I had no idea what greens the local vendor was putting in my basket – he’d just smile and say to cook it with confidence, enjoy it, be surprised and send him a plate! I’m not sure what I ate, but it was delicious.

I had the same experience when I lived in the Italian countryside and the farmer told me the names in a dialect I didn’t understand.

The discount supermarkets are chief providers of cheap food, which is where education about [the real cost of] cheap food needs to begin.

I’m loving the ugly food movement — insane what get’s tossed because it doesn’t look perfect.  I think all market sellers should have ‘seconds’ bins so it’s not tossed.

Morrisons sell ‘wonky’ (misshapen or ‘ugly’) – fruit and veg at a lower price: just as good as anything else.

More than three scale marks on an orange rind and Spanish farmers get no cash for them.

Maybe what we need is to change the emphasis. Instead of having ‘ordinary’ and ugly or wonky fruit and veg, we could change to having ordinary and then premium or beautiful.

Sustainability:
Echo Farm in Essex, upstate NY, actually plants all its produce specially for particular menus (i.e., weddings & events), so that every plant on the farm is spoken-for and there’s minimum waste from seed to service. We went to a Wild Foods dinner of entirely foraged foods and it was divine! They are also converting their animal fat from their slaughtered meat animals into biodiesel.

Green markets in the US sometimes have compost-drops.  They have giant plastic garbage bins that you drop your stuff into and they make it into garden soil and sell it.

My compost goes to a neighbour who has an allotment, so I get produce in return, which is a useful tool for education.  For apartment dwellers, it’s nice to be able to recycle the waste.

The Case for Organic and Biodynamic:

You can eat organic economically if you waste nothing and shop carefully.

India is the place to understand biodynamic: the most amazing and fruitful farm I saw when I lived in India was biodynamic, run by family of five, outside Mysore.  With biodynamic, everything is related to everything else.

From the Chatline on French Gastronomy:

The View from the Kitchen:

The creation of a new dish does more for human happiness than the discovery of a new star – Brillat Savarin.

Grimod de la Reyniere was a very complicated character dealing with an unhappy family history, physical deformity, and the upheavals of the French Revolution.

Regionality, terroir, language, myth & fiction are all related.   Roland Barthes writes that something can be both true and a myth: saying something is a myth doesn’t mean it isn’t true.

Storytelling can lead to the elevation of the mundane.  The beauty of myth is its subjectivity: Barthes’ pairing of steak and red wine is a ‘true myth,’ but there are also partially-true myths.  Communal myths have a function: they tell a truth!

Myths can arise in liminal times & have social functions; many myths are consciously created, as in Grimod’s ‘gourmand’ transformed into a glutton.

Are these actually myths, or simply a creative representation of society?

Grimaud’s influence must have been immense. The Almabnach de Cocagne of 1920-23 was dedicated by Bertrand Guegan to the spirit of Grimod.

News of this had a mixed reception. There were those who said it Mitterand no credit.

Grimod is intentionally transgressive when compared to the professorial attitude of Brillat-Savarin.  Mme. Vigee Lebrun attend gourmet dinners dressed as a man, which seems to prove that women were not considered part of the group.

The contradictions in treatment of women – mother, provider, seducer – is striking.

There’s a wonderful (21st century) book by Kyla Wazana Tompkins, Racial Indigestion: Eating Bodies in the 19th Century that is really provocative and helpful in thinking back about gendered discourse around eating.

Madame Merigot’s La Cuisiniere Republican—all potato recipes to encourage the French to eat potatoes, who had been reluctant until then – written in 1796, when food was hard to come by…

Elizabeth David’s Mediterranean Food, written at a time when her ingredients were virtually unobtainable, has elements of propaganda – as does MFK Fisher reminding her countryfolk of what would be lost if they didn’t come into WWII.