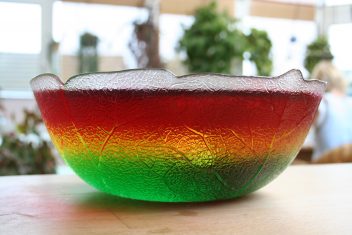 The rise, fall and persistence of galium odoratum

Many colour-flavour combinations are intuitive. An orange or yellow drink is likely to be citrus-flavoured, a red one will probably taste of berries. Green is harder to place. In France, you can be confident you will enjoy a refreshing menthe a l’eau while in the United States, lime is the safer bet. In Germany, the traditional culinary code dictates that green lemonade, ice cream or jelly taste of woodruff.

Known by its German colloquial name as Waldmeister (master of the forest), this plant with its distinctive white flowers and crowns of leaves around the stem grows in deciduous forests throughout Germany and can be gathered wild in spring and early summer. The leaves and stems can be used to flavour drinks and sweets. This is best done by allowing them to wilt slightly after they are picked and then pouring boiling water over them to extract the aroma. Steeping them for extended periods is not recommended because of their high coumarin content, but happens frequently. The result is an occasional headache.

Neither easy availability nor pleasant taste can explain how this distinctive flavour became so popular. Actual woodruff has not been used in industrially produced foods marketed to children for health reasons since 1974, yet artificially flavoured imitations continue to sell well. The leaves of commercially grown woodruff show up on German street markets in late April every year so buyers can make their traditional Maibowle untroubled by such concerns. Germans love their Waldmeister.

The origin of this love affair is probably connected with the Maibowle or Maiwein traditionally served for May Day celebrations. Today, EU law defines Maiwein as wine flavoured primarily with woodruff while Maitrank also has fruit and sugar added1. It is unclear how far back this tradition goes. A frequently cited starting point is the poem de mensium nominibus written by the Benedictine monk Wandalbertus Prumiensis around 8452. Describing events and activities associated with each month in classical Latin verse, it states that in May: Hoc herbis durum prodest mollire lieum (Now it is good to soften harsh wine with herbs). Unfortunately, the connection seems more tenuous the closer we get to the original text. Nineteenth century sources offer more solid ground: the Grimmsches Wörterbuch states that woodruff-flavoured wine is known by the name Maitrank in the 1830s3. A Swiss dictionary quotes a description of Meyentrank dated to 1708 involving fumitory, sage, wormwood, melissa, hyssop, and borage, but no woodruff4. This association seems to date no earlier than the 1800s. By 1854, it is firm enough that the best-selling Romantic poem Der Trompeter von Säckingen by Joseph Victor von Scheffel envisions a medieval outdoor celebration involving Maiwein improvised by a fishing party of noblemen. The lord calls for wine, lemons and sugar:

…Yet the ladies,
Gathered many scented plants,
Broke the ground-ivy and strawberries,
Broke the white-flowering,
May-wine flavouring woodruff.5

This comes very close to what modern Germans know by the name of Maibowle. By 1901, the influential cookbook of Henriette Davidis (39th edition) provides instructions for making Maiwein:

Select young and fresh woodruff (in April and May) before it flowers, removing the lower leaves and lower parts of the stalk. If you have not gathered it yourself, quickly rinse it before use, then, if there is a generous quantity of the herb, place it in a porcelain sieve and strew it with sugar. Now pour as many bottles of Rhenish or Moselle wine as you wish to have of May wine through the sieve into a punch bowl as this is enough to give the wine the flavour of the woodruff’s delightful scent. The drink must now be sweetened with sugar to taste.6

The recipe continues by pointing out that woodruff may be steeped briefly if not enough of it is available, but must be removed quickly and thoroughly. It ends by suggesting that May wine may be served as a sorbet, frozen and mixed with beaten egg whites, on hot days. In 1958, the Kochbuch der Büchergilde by the sadly underestimated Grete Willinsky suggests the following procedure:

2 bunches of woodruff, not yet flowering (plucked the previous day and cleaned thoroughly of beech leaves and earth, but not washed), 2-3 bottles of Moselle wine, 150-200g sugar cubes, 1 bottle of sparkling wine
Pour one bottle of Moselle wine into the punch bowl, add the sugar and stir until it has fully dissolved in the wine. Then tie the thoroughly cleaned, but not washed bunches of woodruff together with a string and suspend them in the wine with the leaves downward. Cover it – do not let it steep longer than 20-30 minutes! Now remove the woodruff, add one or – depending on the number of guests – two bottles of Moselle wine and – immediately before serving in glasses – one bottle of sparkling wine. The latter may also be left out. May wine without sparkling wine makes a delicious nightcap.7

Few recipes are more elaborate than this, though it is traditional to add fruit, especially oranges or strawberries, to the punch bowl. Maibowle is served for Tanz in den Mai, a late-night party on the eve of May Day that usually features outdoor music, dancing and flirting.

Especially in the summer months, woodruff is served in another form, as Berliner Weiße mit Schuss. This refreshing drink combines a light wheat beer with a dash of syrup, usually ‘red’ (raspberry) or ‘green’ (woodruff). Not coincidentally, those are the flavours that almost all supermarkets will sell, even if they have no other syrups, and thus the ones that most children grow up with.

An even more central role in childhood nostalgia is reserved for green jelly – Götterspeise. The name, literally ‘food of the gods’, predates the introduction of pre-packaged mixes by the ubiquitous Dr Oetker in 1912. Since 1920, the product comes in three basic flavours: cherry (red), lemon (yellow) and woodruff (green). Most children tend to prefer green, served with whipped cream, vanilla sauce, or milk. Unlike its American counterpart Jell-O, Götterspeise is conservative in its range of flavours. Most manufacturers only offer the traditional triad.

Ice, too, comes in woodruff green. At the upper end of the market, many artisanal ice cream parlours produce it, but most Germans remember it from the sweet, cheap, and ubiquitous water ices they bought for pennies on hot summer days. Generations of children sucked this crunchy, sticky mess from plastic tubes or scraped it from cups with a spoon (we often carried our own because the plastic spoons supplied by sellers were too flimsy for the job). Again, the range of flavours is dictated by the colour palette, with green being Waldmeister. This market segment is dominated by the Busemann GmbH, a family-owned Mittelstand firm which exports its products globally8. This has established woodruff ice in numerous new markets around the world9. The only foray of an industrial giant into the market ended after only three years in 1978: Grünofant, the vanilla and woodruff popsicle by Langnese (now owned by Unilever), still inspires enough nostalgia to fuel a Facebook group lobbying for its return and inspire discounter Aldi to introduce a copycat version in 201410.

Few mass-produced woodruff flavoured foods still use the actual herb. This is due to concern over its potentially toxic coumarin content, but also because artificial flavouring is more reliable and less dependent on the weather. Real woodruff is a seasonal delight, available only from April to June, and anyone who works with it must manage natural variations in intensity and taste. Some producers marketing to adults have chosen to use the real thing. This is legal, as long as the coumarin limit of 2mg/kg is not exceeded11. Most woodruff still goes to individual buyers, though. Traditions die hard, and Germans just love that green taste.